Tractorgate 2? What's it all about? 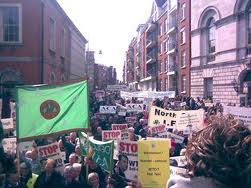 While Dubliners head out for their lunchtime sandwich today they will see thousands of farmers gathering with placards and megaphones on Government buildings. Also expected on the streets are combine harvesters, tractors and cattle trucks; a reminder of the famous "tractorgate" protest on Dublin in 2003 - IFA's drive to draw attention to difficulties on Irish family farms. Throughout the country today, many dairy co-ops, beef, lamb, pig and poultry processors, grain merchants and marts are also expected to close for business in support of the farmer's action.
Want to know why? Here's a quick guide -

The protest has been organised by the IFA (Irish Farmers Association) who feel that reform of the Common Agricultural Policy (CAP) will threaten productivity and jobs in the farming and food sector. They feel that farm output will drop and our targets for increased production as laid out in the Government planned "Harvest 2020" programme will be undermined. Currently CAP is being negotiated for its next round and is set for changes in how subsidies are paid to farmers and for what type of farming activities. Payments will be separated from numbers of livestock (headage based) to a more acreage based system, which will benefit some farmers but penalise others. Some observers say it's fairer and more environmentally friendly and has been called the "greening of CAP". Others say it will hamper growth and ultimately make Irish farm incomes smaller. 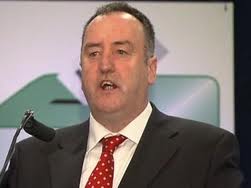 IFA president John Bryan (right) has accused the agricultural minister Simon Coveney of misleading farmers in the scale of the CAP proposals. He says they will flatten basic payment by 2019 and result in some farmers experiencing income cuts of 50%. The problem is that in negotiating CAP reform, ag ministers throughout Europe have to deal with very varying types of farming, environmental and sustainability issues and look at what consumers can pay as a fair price for food. In recent decades Europe has promoted a cheap food policy whereby farmers are subsidised to produce as consumers couldn't pay the actual price demanded for a kilo of beef for example. If you reduce this subsidy, or move this subsidy more towards an environmental emphasis, the result is that us consumers may have to pay more for food.

Subsidies in many cases are what are keeping many small farms in Ireland in operation. We also have to ask, do we want to keep a family farm model and if we do, what is Europe prepared to pay for this? Or do we want to reward the "leanest" and biggest producers. CAP has a spectrum of roles and needs, for ministers it's a challenge in finding the right balance across the EU and upsetting farm organisations in your own country is part of that process. Everyone wants the best they can get for their region, but from a limited EU budget that's not going to be possible. 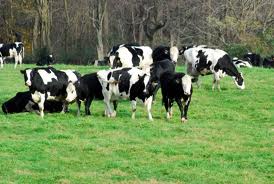 The protests today are also designed to send a warning shot across Irish government bows in advance of the budget. The IFA are calling for restraint on further taxing farm families, particularly in an environment where feed costs, fuel costs and inputs are on the rapid rise and those in the white meat sector - pig and poultry producers are seriously under pressure. Already these producers and processors have asked for retail price rises in order to cover their costs. We're in a tricky environment for farming at the moment, but there are those who would say it's never "not tricky" - food and commodity prices are always and possibly increasingly volatile in a global marketplace where hedge funds are also active in influencing price outside of its intrinsic value. Is this just another storm to weather or should Government and the EU be building in more mechanisms of stability in farming and food production? Controls on betting on food prices (have been tabled) and codes of practice to regulate the retail price of food?


lronically today, we will also see an announcement from Kerry Group around the corner from the protests in the Shelbourne hotel on the creation of 900 new jobs at its plant in Naas. The announcement will be attended by the Taoiseach, Taniste and Minister Coveney. Whatever you may think about the timing, this is a fantastic news for employment and shows a thriving dairy export sector. Farming is an activity where you can have one sector thriving and another in ribbons. Perhaps in CAP reform the focus could be more on evening out that volatility and making the yellow brick road a little less twisty.