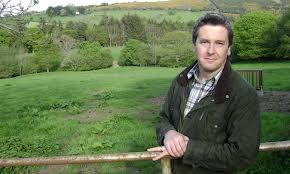 Last night on RTE television, journalist (and my other half) Philip Boucher-Hayes presented the second "What's Ireland Eating?" documentary which we developed from the book we wrote together in 2009 - Basketcase; what's happening to Irish food?.

Like the first "What's Ireland Eating" programme which grabbed Irish audiences by the throat last year, it was a powerful investigation on what's going on in the Irish diet. Plenty of shocking footage of visceral fat choking a patient's insides as he lay on the operating table of a Dublin hospital. Plenty of new research denoting that high calorie, high fat, high salt food is not just loosely "addictive" but actually addictive. Norah Volkow, a scientist in addiction from the US explained how even the idea of consuming a food you crave creates a dopamine response, which is often not matched by eating the food itself. So you consume more, to get the same hit. Looking at signage of fast food brands can cause this response in people, with some reaching the point where they can no longer regulate their brain's response or demand for certain foods, let alone deal with what happens once they are in their body. 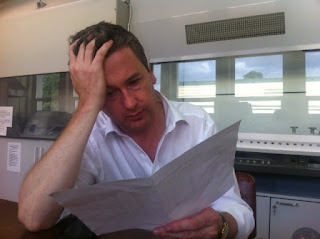 Let's be clear here. We all eat bad food from time to time. My particular "crap food" favorites are peanut butter, crisps and prawn crackers. In a sequence that was cut from the final edit for time constraints, Philip recorded a food diary, accurate down to the last Skittle and glass of whiskey. Fortunately his main meal that day was a ratatouille that I had made for supper, which is low in calories and thankfully full of pretty good nutrients. The photo on the right shows him receiving his nutritional breakdown which was conducted by Teagasc. Not a very happy face is it? But that's real life, we're not all as healthy as we may think we are.

But is a high calorie snack food bad for you if you only consume it now and again? One of the central questions we wanted to ask in the documentary was - is curing Ireland's obesity problem as simple as saying "everything in moderation". Professor Mike Gibney from UCD shook his head "That's not working is it?" which is pretty much the case. We know more about food values and calorie content in Ireland than perhaps we ever did. Yet our obesity figures are still on the rise. So why are so many of us out of control in our eating habits and does the food industry have a role to play in curbing this pattern?

Should there be a reformulation of ingredients in manufactured foods? Would a sugar tax bring about behaviour change? Should healthier options be subsided by taxing sugary drinks? Is more education the answer? There are many options in the war on obesity that have been employed by other countries - Denmark (fat tax) and some states in the US (banning sodas over 16 ounces in volume, punitive taxes on soda drinks in others) but obestiy is a complex issue that needs a complex set of solutions. As the weight watchers group in Athlone who featured in the documentary admitted "we eat when we're miserable, we eat to celebrate.. that's why we're here". They said that a lot of their excess weight was down to their individual responsibility. On twitter yesterday in Ireland #whatsirelandeating was the topic trending for the entire day with multiple tweets per second as the programme aired "what can we do about obesity... tax the junk food companies.... I never knew a bag of prawn crackers had 600 calories!". What was most important was that Irish people were engaged by the issue and engagement itself has to be part of the solution.

We didn't provide answers in the documentary but asked the questions. If you want to have a look it's on the RTE player at the link below.

http://www.rte.ie/tv/programmes/whats_ireland_eating.html
Posted by suzanne at 1:20 PM