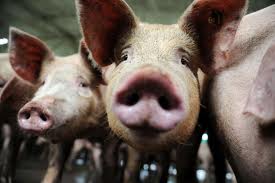 This week in the Irish Farmers Journal I'm writing about the pig sector and the precarious position it is currently in because of the huge rise in animal feed prices. It was chilling to talk to farmers who are losing up to 10,000 euro a week on their farm. It's a crazy figure, the type of stuff that would not only keep you awake at night but encourage you to sell up and get out before you lose your mind. With feed prices pushing cost of production above what farmers are getting per finished animal, that's what the losses are -  10 euro a week per pig on a 600 sow unit is 10,000 a week. Put another way, half a million euros per year.

New's today that meat processing company Olhausen is to close three plants in Dublin and Monaghan with the loss of 160 jobs makes the crisis all more pertinent. Olhausen was an old Irish business and such was the popularity of their sausages they were even shipped over to James Joyce in Zurich. Unfortunately it looks like the firm will be wound up, another casualty of a very tough pigmeat trading environment which has put processors also under massive pressure. There has been some movement recently (and thankfully) on the supermarkets front in offering a bit more on price but as pigmeat is increasingly seen and sold as a discount meat, pig farmers are still in a volatile position. As long as rashers are sold on "two for one" offers and priced as a loss leader to shift other groceries that situation is going to remain. The only light at the end of the tunnel is that pig producers across Europe are leaving the sector, partly because of the upcoming legislation bringing in changes to the housing of sows.

Up to now, female pigs have been in stalls to prevent bullying and allow for even feeding. Animal welfare improvements now mean they will be loose housed in groups - but for farmers here that means an average investment of 300,000 euro to change their systems around. Across the EU pig producer numbers are decreasing and decreased supply should mean a rise in price. Without it, we won't see the 400 or so farmers in the Irish pig sector here next year. 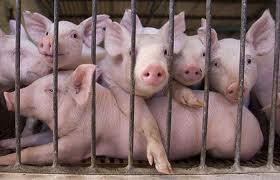 My last piece for the Farmers Journal on the large-animal vet sector is now available online at the link below. My food column this month in The Irish Times Gloss magazine is unfortunately not online but I'll put a copy of it soon on Basketcase. If you like eating and well sourced Irish food it's an entertaining read, with plenty of gossip and upcoming food events thrown in.

http://www.farmersjournal.ie/site/farming-Prevention-and-cure-15654.html
Posted by suzanne at 12:48 PM