Glastonbury for farmers. "The Ploughing" - what's it all about? Ireland's Glastonbury for farmers began today in New Ross, County Wexford. It was a very rainy day by all accounts and the forecast doesn't look much better for the rest of the week. Weather aside, by the time the week is out 200,000 people will have visited the event. For those of you stumped by the whole idea of "the Ploughing", here's a little explainer:

The National Ploughing Championships began as an event where farmers could compete against each other at tractor ploughing and horse ploughing. This involves ploughing furrows in very straight lines, turning over the soil in an even level fashion and loads of other tiny details that are followed very closely by the spectators and judges watching the actual ploughing matches over the three day event. Ploughing enthusiasts first compete at county or regional level and then make there way to the finals which is "The Ploughing". Women also compete and there are still very popular classes for those who compete with horses.

The event has now grown into one of Europe's biggest outdoor events with over a thousand exhibitors. Farm machinery, equipment suppliers, feed merchants, pedigree animal associations, farm organisations, food companies, homeware businesses, builders, car dealers, banks, political parties all exhibit at the event - selling their wares or ideas in a massive series of tented villages that makes the old Spring Show in the RDS look like a children's party. The scale of it is truly massive. There are hundreds of lanes and walkways between the tented stands with tracked surfaces to keep the mud out and plenty of things to catch your eye, whether its a new range of waterproofs or a deLorean tractor costing half a million euro. 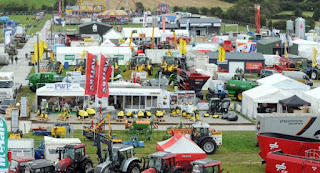 Most farming and rural people go to the ploughing every year and look forward to it as a bit of an annual shindig. Despite its massive size you continually run into people you know and spend a long time updating on news and gossip therefore missing half the events you went to see in the first place. When we used to film there for Ear to the Ground I viewed the entire event as one long nightmare. We could never do a piece to camera without the presenters being jumped on by eighty kids and people going crazy in the background. Ten takes later and a very stressed Mairead McGuinness and cameraman, valium was truly in order. We also had a selection of camera malfunctions because of incessant rain and clothing that literally never recovered from three days at the event. To go to the ploughing and not to film there for me is the greatest of pleasures. 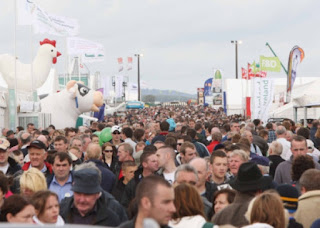 If you're interested in farming or food try and get down to see it. Many urban people come back from the ploughing dazed and confused mumbling "it's a different world down there". If you're not familiar with the size of a Belgian Blue's arse or ever stood close to a modern combine harvester yes it is probably a bit alien. But this is the livestock and machinery central to our farming success. Everybody at the ploughing has a role somewhere in the rural economy, or an interest and passion in farming and the food chain.

This year the event is in New Ross County Wexford. The ploughing used to be in a different part of the country every year but recently has tended to stay at one site for several years which helps general logistics. This year I plan to head down on Thursday to meet some friends, colleagues and have a look at the pedigree cattle. Their calm amid the massive crowds always impresses and they are beautiful animals, often the unusual breeds such as Pietmontese, and beautifully presented by their farming owners.

The ploughing is not just an event where you'll see the great and the good shaking hands and currying favour, it's primarily a celebration of how important farming is to Irish life, and what's more if you've kids, they will thank you forever for taking them. For more check out www.NPA.ie
Posted by suzanne at 3:05 PM