It's not surprising that MacDonald's sponsorship of the London Olympics has generated a bit of heat, after all, sport and Big Macs are hardly a new pairing - the MacDonald's brand has been linked to the Olympics for several decades. For London 2012 MacDonald's will have four restaurants in Olympic park, including the biggest MacDonald's in the world which will serve up 1200 customers an hour and sell £3 million worth of fast food during the games.

As expected, the chain has been criticised for promoting the consumption of fast food at a time when the UK, like ourselves, is facing huge problems with obesity and should be linking sports participation with healthy living.  Last week, members of the London Assembly said firms which sold junk food should not be linked to the Olympic Games. Cadbury and Coca-Cola are also sponsors.

Sponsorship by these type of brands is at odds with UK policy on obesity and as with Ireland, calls into question the role between food companies and sports advertising. It's also now apparent that the deal with MacDonald's is going to negatively affect other food retailers at the Olympics who are not allowed sell chips unless they are with fish, as this was stipulated in the MacDonald's deal. 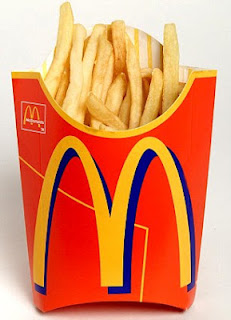 A recently published memo to food suppliers from the London 2012 organisers Locog says "Due to sponsorship obligations with MacDonalds, Locog have instructed the catering team they are no longer allowed to serve chips on their own anywhere within the Olympic park." Not surprisingly, this latest piece of news has gone down like a lead balloon with other food suppliers contracted to the games.

As with a recent social media campaign that went wrong for MacDonald's, their Olympics sponsorship has so far generated much more bad news stories than good. But controversy or not, the more burgers MacDonald's sells the better it is for Irish exports; they are the biggest single buyer of Irish beef and use it in their restaurants all over Europe.

So here's a conundrum. Can we complain on one hand about food companies contributing to obesity when they are also such big contributors to our GDP and create valuable Irish jobs? On Today with Pat Kenny this week I examined this paradox and the huge buying power MacDonalds has in the Irish beef sector. Check out our discussion on the programme at the link below