Meet the GM hacker who modifies food in his kitchen 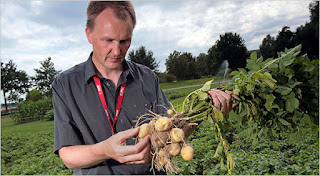 Is GM food the devil? Last week I spoke at Kilkenny Arts festival on plans to grow genetically modified potatoes for the first time in Ireland. On the panel with me was Cathal Garvey, a bio-hacker who makes GM food in his kitchen, literally. Cathal brought a lot of new light and discussion to the subject.

He gave us a basic run down of how genetic science works and explained how he can hack qualities from one plant (such as luminesence) and insert it into another. Hey presto - glow in the dark bananas. What Cathal advocates is more discussion around GM food which informs consumers rather than scaring them, and liberalising the ability to alter food so that anyone can do it,  taking control from the agri-chem giants such as Monsanto and DuPont.

It's clearly one of the problems in the debate on GM - Monsanto have such a bad name in this area they make the Republican party look like a bunch of Carmelite nuns. And for most people, Monsanto is GM. They have wreaked the American food chain, polluted it's environment with unwanted crops, sued farmers and wield an unethical, ridiculous amount of power in how food is produced.

But genetically modifying food is not simply Monsanto. What Cathal (pictured below) advocates is that GM should be available to everyone. For young scientists like Cathal, there is the potential to create food that is patent free, and could have a role in impacting positively on hunger in the developing world. 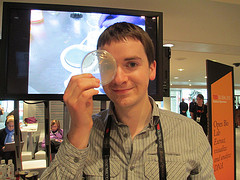 Now this kind of talk upsets most people. Most foodies and consumers consider GM devils spawn and any genetic modification of anything, is unnatural, and unwanted. They say GM won't solve world hunger, the GM agri-chems have already meddled with Africa in a threatening way which has benefitted no one but themselves. But again, GM is not Monsanto. It is much more than that. What has raised people's hackles about the proposed trials in Carlow is that the potatoes may eventually become a commercial project that will again benefit private business and no one else. But Teagasc's answer is that it's not a commercial project and that without that without testing GM they can't go forward in understanding how it affects the environment.

If you want an overview of the Teagasc trials, check out this recent piece I did on Today with Pat Kenny explaining the potato sector in Ireland, the prevalence of blight and an explanation of Teagasc's plans at Oakpark.
http://www.rte.ie/radio/radioplayer/rteradioweb.html#!rii=9%3A3228018%3A133%3A14%2D03%2D2012%3A

What's clear is that GM makes people impassioned and angry most of the time. What was refreshing about our talk at Kilkenny is that no one threw rotten fruit at us, all views on the topic were aired and there was lots of new stuff learned by all. Opening up the debate on GM, separating the scientists like Cathal from the Monsantos of this world allow discussion that's not adversarial but interesting, funny and really valuable. And if you want to make your own luminescent yoghurt, have a look at Cathal's website below. And send me some when you're finished.

http://www.indiebiotech.com
Posted by suzanne at 2:58 PM