"Back in the bottle"; how Irish milk can be more than a cheap commodity food... 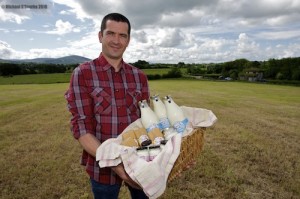 This week in the Irish Times I'm examining "single estate milks", or milks produced from single farms and sold at a niche level. It's a fascinating way of adding value to a traditional product that has huge price vulnerabilities. Here's the piece. -

The milk van may have disappeared from our lives, but the clinking of glass bottles and the creamy first pour is back on the Irish breakfast table.


The Irish Times, 9th June 2012
Suzanne Campbell
“Single estate milks” – milk produced by a single farm – are a new growth area in Irish food. They’re the non-homogenised alternative to milk from the large agri-giants that most of us put in our breakfast cereal every day.
While it sounds glamorous, “single estate” milk was how milk was originally sold in Ireland. One household with spare milk sold it to another – or it was bartered for pig meat, beef, or poultry. The recent rise in organic milk sales has given other farmers the cue to do the same. Now milk produced from single herds, including Darina Allen’s tiny Jersey herd at Ballymaloe, is available to the consuming public.
The glass bottles and cute labelling of Ballymore Farm milk hints at the innovation and sense of fun behind some of the single-estate milks. Down on their land in Co Kildare, Mary Davis “does a bit of everything”, as well as yoghurt-making, alongside her husband; farmer Aidan Harney (pictured above), and business partner Joey Burke. Earlier this year the team made the brave move to bottle and sell their milk direct to consumers.
“Bottling it ourselves seemed to be a completion of what we do – we manage the herd, milk the cows and then sell it, otherwise the milk goes off in a big tank and you never see it again.”
Their 50 cows are thriving on the spring/summer grass and since going organic five years ago, Davis has seen big changes on the farm, and not just the orders from top-range retailers such as Selfridges in London. “So many things have improved. Our herd are on deep straw beds in a big, open shed, they’ve more room.” Most notably, Davis says their cows now find calving a “non-event”. What’s the reason? “Because they’re happier.”
The bottled milk from Ballymore Farm is pasteurised to kill bacteria, but unlike mass-produced milk, it’s not homogenised, a process used in the large creameries to break up fats and give milk from many different herds more consistency. When you unscrew the cap from a bottle of Ballymore milk, the cream has risen to the top. For Davis, this is about more than nostalgia.
“Many people can’t tolerate milk because homogenisation disperses fats down into the milk. Ours is easier to digest, and that’s one of the reasons why many consumers now want non-homogenised milk.” In Donegal, An Grianán, one of Ireland’s largest organic farms, produces milk from coastal land on the Inishowen peninsula, with its milk and yoghurts now stocked by Dunnes, Tesco and Superquinn.
In these lean times, why are customers choosing more expensive milks? “Many of our customers are young mums, who don’t like the thought of fertilisers and things ending up in the dairy products they give their kids,” says Sheila Gilroy Collins from An Grianán. “But it’s also that our milk simply tastes fantastic.” 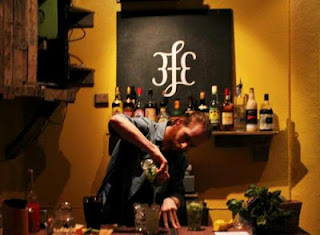 For coffee-maker Colin Harmon, the taste factor is everything. At his coffee shop 3FE on Grand Canal Street, the coffee changes every week according to seasonality. but Harmon realised he wasn’t paying the same attention to the milk. “I went to visit some farms, looked at cows, and now we buy all our milk from the An Grianán herd in Donegal. “It’s organic, but more importantly for us, it tastes great,” he says.
Next week, Harmon travels to Berlin to compete in the World Barista Championships, and is taking milk from An Grianán with him for his cappuccino entry.
“I travel a lot throughout the world and I think we don’t realise how incredible Irish milk is,” he says.“The milk market is very like coffee in that most of it is based on cheap product at commodity prices. Farms sell milk into a system; it’s mixed together at the creameries, so there’s no incentive to really up the quality.”
Tommy Relihan began producing glass-bottled milk on his farm in Adare (pictured below) two years ago.“When I started, there were 20,000 dairy farmers in Ireland but only five were licensed to sell their own milk.”
His Adare Farm milk isn’t organic, but is from a single herd and non-homogenised. “I get great satisfaction from bottling our own milk. Consumers love it; first the glass bottle catches their eye, then they say – ‘that’s real milk’.”

Ballymore Farm; David Tiernan, who makes of Glebe Brethan cheese in Co Louth, and Darina Allen also sell single-estate “raw milk”, which is unhomogenised and unpasteurised. Raw milk is preferred by many Irish consumers who have dairy intolerances, or who find it helps in the management of ailments ranging from asthma to eczema. In Ireland, raw milk is caught in a food-safety loophole, but at the moment, dedicated producers and supporters want raw milk to be kept on the market.
Single-estate milks may be voguish but there’s no doubt customer demand is there. “Not just raw milk, but unhomogenised milk, is an issue of consumer choice,” says Mary Davis. “Our milk tastes great but it also has so many health benefits for people, that’s why they want to buy it.”