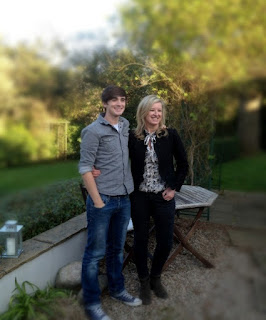 If you haven't come across food writer and television presenter Donal Skehan you're in for a treat. He has a fantastic blog that is one of the most lush collections of photography and recipes you're likely to find anywhere on the web.

In the last few weeks I've been appearing on his second television series "Kitchen Hero" talking about how to cook family meals for less, and sourcing and using traditional Irish ingredients. We shot these segments in the garden at my house and I have to say they were one of the most easy, quickly executed and relaxed television shoots I've ever had the pleasure to work on.

And this is coming from a former RTE producer/director. I've blown fuses in people's houses, been run over by a herd of suckler cows, had master tapes impounded on a shoot in Vietnam and generally more filming dramas than hot dinners. 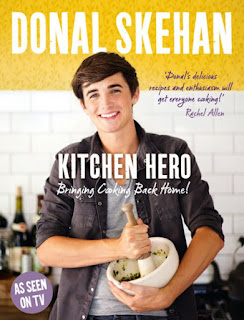 So it's both disconcerting and a relief sometimes to be in front of the camera. Donal, the crew and series producer David Hare are a fantastic bunch of people and a pleasure to work with. A few walks around the garden, a brief recce on lighting and location and we were straight into filming. Amid a hectic house of kids, dogs and comings and goings we rolled off the segments and were done and dusted in a heartbeat. Once the red light went off it was time for cups of tea around the kitchen table, slices of wonderful cheesecake and tales of shoots gone wrong and shoots gone right. The rest of the series sounds brilliant, with Donal  and their plans for the rest of the series. Kitchen Hero can be seen on air on RTE one 8.30pm Monday nights.

What I especially love about Donal is his energy and passion for food. After beginning his career as a food writer and cook, it became clear that once he started photographing his food and putting it online, thousands of people wanted to follow the blog. This passion has lead to two books and two television series.

Knowing the work and attention to detail Donal puts into his food and photography it's no surprise. He's also simply a very talented guy with a huge work ethic, and cooks delicious food in a simple and affordable way which chimes very much with where we are now.

Click onto the link below to watch the series on the RTE player - in this episode my piece is about 14 minutes into the programme. But I suggest you watch it from the start and check out the rest of the series. Donal's recipes are really delicious and very simple to follow. In fact, once you start watching him you'll want to run to the kitchen straight away and start cooking. I literally sit there every week watching the show saying "I'm going to cook that for dinner tomorrow... what a fantastic lunch that will make" etc. It's no surprise that his food really is Good Mood Food and his passion for food is infectious and invigorating.