Into the West; where's the good food? 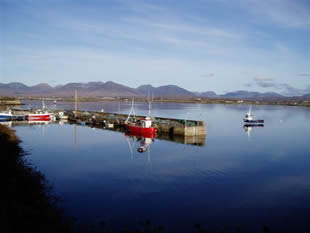 On a foray into the West last week I was determined to prove that there was more to eat than the "rubber cheese sandwich" type offering that a friend recently convinced me was all that Connemara had to offer.


No no no! I said, Connemara is coming down with gorgeous local eateries, fresh seafood and hidden gems! A couple of days later I was wondering had I spoken too soon. That's not to say there isn't good food available in this part of the world - just not enough of it, and I'm talking specifically about Connemara - we know that Galway City has plenty of good restaurants but as you head Northwards into the real beauty-shot country which is a huge tourist magnet for international visitors, the landscape gets rough and beautiful while the food just gets, well, rough.

And this is the contrast that really struck me on my three day trip. If you have a region that is a huge draw for tourist euros, why aren't there more restaurants and cafes capitalising on this and offering local food of good quality?

Two places that I ate in really impressed here, the first was Ashford Castle which I had expected to be fairly average five star food, by which ususally means; anonymous, foie gras on the menu, expensive wine list and really geared towards Americans. However, I was very pleasantly surprised - most of their menu was sourced locally, including vegetables (which is hard enough to pull off in this part of the world and in winter), every detail of their menus from crusty breads to afternoon biscuits were made in their kitchens and the entire cheese board was an Irish selection. And the waiters and staff had good knowledge of food on the plate, local food and what they were selling. An unexpected top marks here, and even at this level it represented real value for money.

Another eaterie that scored highly in Connemara is O'Dowds seafood bar in Roundstone - the beautiful harbour village pictured above. O'Dowds is no secret and last week they deservedly won a Le Bib Gourmet award from the hard-core bunch at Michelin, which means they are recommended as a local food and "value for money" outlet. And that doesn't surprise, the boats are pulled up literally yards from O'Dowds unloading the crab that appears on their menu. Their food is fresh, delicious and tastes of the West which is something that the West should be selling as strongly as its scenery. After all, it's on the edge, literally, of the freshest, sharpest seafood factory in the world, but somehow the wealth of the Atlantic or the mountain lamb of Connemara just isn't widely available when you try to find a place to eat it. 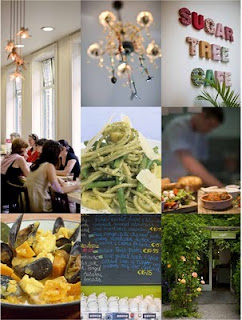 In advance of my visit I looked to Good Food Ireland and its map of Irish restaurants - they have four members in Galway county - Ard Bia at Nimmos in Galway city and Bar No. 8 at Dock Road in Galway. Outside the city they list White Gables Restaurant in Moycullen and the Connemara Coast Hotel. I know that Good Food Ireland members have to be really committed to Irish food to be members of the group but I was still surprised there were not more food outlets generally heading this way in an area which is all about authenticity and a "real" Irish experience.


Instead, there are villages all across this part of the West where the rubber cheese sandwich rules or garage hot counter food (God save us) is all that's available. And I'm not saying that five star is the way to go... small cafes with a good food ethos can be just as succesful. And food can be a destination draw in itself; Moran's on the Weir outside Galway brings people to that area, just to eat, proving that food itself can be a tourist draw, not an add on.


I've been told that Olivers sea food bar in Cleggan is one for a decent food in Connemara list, as is the Avoca in Letterfrack. I know the Avoca's are hugely successful, in fact I live in the shadow of the Powerscourt Avoca and find myself there far too often for comfort - but their food is a solid winner, fresh, with an Irish twist and it ticks every box on the list, especially for tourists. It's just a pity that it might take the Avoca in Letterfrack to show other smaller operators how to do the same thing in a smaller way, I would love to see more independent good food operators in this part of the West. If you have more to add to the list, please send them my way x
Posted by suzanne at 12:47 PM