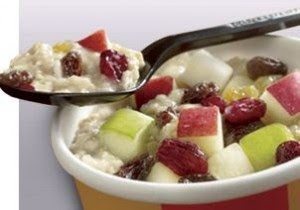 While I loved the recent comment that San Francisco had banned toys from MacDonald's Happy Meals, despite the toy being the most nutritious item in the meal, the news that they've fallen foul of labelling regulations in the US is threatening one of their prime products - a Oatmeal and Maple fruit breakfast.
While McDonalds pound the Irish airwaves with ads about their “premium” coffees and other such delights, over in the US the Vermont Agency of Agriculture have taken issue with the new Fruit and Maple Oatmeal item which they say does not actually contain any maple. The description violates Vermont's stringent maple law and could mean that McDonalds will have to change ingredients or labeling.
"What we understand, is there is no actual maple in the [McDonald's] product being advertised, and regulations are very specific for how the term maple is used in advertisements," said Kelly Loftus from the Vermont Agency of Agriculture.

"It is illegal to use the word maple on a product unless the sweetener is 100 percent pure maple. Artificial maple flavouring should be clearly and conspicuously labeled on the principal panel with the term 'artificial flavour'."
If we looked for an Irish equivalent, it would be the same as a product using the word “honey flavoured” on a food product when there is clearly everything under the sun except honey in it.
Not that honey itself hasn’t had its own problems with labelling trickery, the Food Safety Authority of Ireland recently investigated an “Irish” honey, that strangely enough came from bees in China. It took expensive DNA testing of the pollen in the honey to correctly locate the true country of origin. As a result, the company was found guilty of breaching labelling laws and quickly rapped on the knuckles.
The MacDonald’s oatmeal and maple syrup product is part of their relentless campaign to capture more and more of the breakfast market. Going to MacDonalds for breakfast sounds lunatic to me but it’s a huge earner for MacDonalds and surprisingly almost a quarter of the company’s revenue is generated during the early hours before its typical Big Mac and McNugget menu comes into play for lunch. In order to maintain its dominance, McDonalds pushes out a steady line of promotions and new products. The Fruit and Maple Oatmeal under issue, has actually seen big success in regional markets and is going nationally across the US this month.

In response to the labelling allegations McDonalds says they are "currently in discussions with the State of Vermont to ensure that we meet any applicable state standards." They apparently have 60 to 90 days to respond to officials. It may not seem like the biggest breach of labelling in the world but a breach is a breach, and if they are prepared to fudge the details on one item it makes everything else they do look bad.

Yes I know MacDonalds are one of the biggest customers of Irish beef but that shouldn’t let them off the hook in toeing the same line as other companies do in terms of food labelling regulations. After all, big shouldn’t mean you can pay scant attention to the law.
Expect the Maple and Oatmeal breakfast in Irish outlets any day now, though if it isn’t made from maple syrup, what exactly is in it? You have been warned.
Posted by suzanne at 5:50 AM