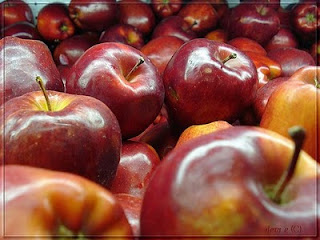 While America's food giants introduced us to the Frankenfish salmon earlier this year, they've outdone themselves this time with a genetically modified apple that doesn't brown. The apple is said to have "silencing" enzymes which prevent it from looking old even if it is old. Even the most stupid of us have to realise this isn't a good idea. Would I want to eat a maggot ridden burger just because the maggots are invisible?


Critics are calling it the "Botox apple", despite the fact that botox is probably a more friendly food choice than this particular piece of fruit. According to Associated Press, Okanagan Speciality Fruits who developed the apples said that the company "licensed the non-browning technology from Australian researchers who pioneered it in potatoes."
The company's director Andrew Kimbrell told AP that this technology "appears to benefit apple growers and shippers more than consumers." Umm. Apparently the President of Okanagan Specialty Fruits, Neal Carter, even agrees "Some people won't like it just because of what it is." How bizarre is that? But he also adds that "people will see the process used to get it had very sound science."
I think most of us would rather know when the food we're eating is past it's best. As it stands, Modified Atmospheric Packaging is what's keeping most bagged salad leaves from turning brown when they are in fact well past their best. Bagged salad is one of the huge food hits of the past decade but the process of gassing salad leaves to keep them from browning isn't that far removed from the Frankenapple.
A friend of mine worked at a US plant in the 1990s packing salad into MOP plastic. He thought the trend could never catch on here as allegedly in Ireland we're deeply connected to food and understand that eating this kind of stuff is bad for us. Apparently not. Therefore welcome, the Frankenapple, soon to be seen at your local supermarket. And once the FDA approve it, the Frankensalmon. Roll up folks....
Posted by suzanne at 2:15 PM