Hate to say I told you so #horsemeat 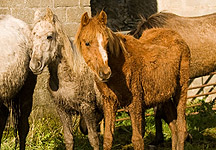 One of the frustrating things about Europe's current horsemeat crisis is that welfare groups in Ireland warned the Department of Agriculture many times about the problems of horses being transported live to Europe. These animals were known not to have passports and dealers openly admitted (also documented in the UCD report of 2010) that forging passports to get horses into factories wasn't an issue.

For many years I have helped the Irish Horse Welfare Trust to try and heighten awareness of the neglect of horses and the issue of live transport. For cattle and sheep transported to Europe or elsewhere there are strict regulations on travel times and welfare, none of which exist for horses. Horses are not checked at Irish ports before they travel for health or individual identification. This free movement of horses under the tripartite agreement between England, Ireland and France was identified in the UCD report as detrimental to bio-hazard controls - laughable now we have proof that many of these horses were going for human consumption. Authorities here denied that Irish horses could be going into the food chain until a Dutch processor in Nijnegan was revealed last week to be selling Irish and Dutch horsemeat as beef. This piece of news closed the circle in effect, though it's still not clear whether this meat came from carcasses killed in Irish abattoirs or from the live trade.

What we also know is that of the five Irish plants who were granted licenses to slaughter horses to cope with the surplus of horses after our boom years, only two are operating horse slaughtering at present. Why? Because there are much larger numbers (the department estimates around 16,000 horses) going out live on lorries to Europe.


If 12500 equines were killed in licensed slaughterhouses (excluding the knackery system) here in 2011, why the larger number of animals going for live transport with its additional costs? Think about it. You have to have a passport (albeit very easy to obtain) to bring a horse to a factory here. Not so if it is killed abroad, even in the UK. The USPCA have identified false passports and forged veterinary signatures used on passports of animals going on the live trade, some which have been dosed with bute or other drugs. So of course the numbers are bigger - it's far easier to get them into a factory in Poland or Italy than in Ireland, as loose as the system here is.

I have two horses, both of whom I could apply for a passport for tomorrow from the 12 agencies allowed to issue them and get both into a factory next week. That's no reflection on B and F Meats et al. It is an illustration of how the passport and identification scheme doesn't work. This situation has been pointed out to the department many times - by myself, the IHWT, the USPCA and the SPCAs involved with horse welfare and rescue. The lack of regulation has been boiling under the surface for so long that it comes to no surprise to anyone involved in horse welfare or movement that there is horsemeat in the food chain. Horses are sold in Ireland for as little as 10 euro. Last year I loaded up a horse with an IHWT officer outside Bray that had been stabbed in the shoulder and was living on a piece of scrap land with no feed or water. It had been sold to a 10 year old child for 30 euro. Doubtless, its destiny was a lorry to Europe before we got hold of it.

What has been of little mention throughout this debate is the welfare issues involved here. Horses are put on lorries that are injured, about to foal or dying. Can you imagine the hellish journey these animals go through without food or water to be slaughtered in hellish conditions like those filmed by hidden cameras at the UK abattoir.

What the horsemeat scandal has revealed is there is overwhelming problems with the equine identification and movement system. Vets need to go back into ports, and the passport system enforced. Having a scheme in place is nonsense without enforcement.

These points were put to the Department of Agriculture's chief veterinary office Martin Blake on Primetime by broadcaster Claire Byrne and myself in a segment on the horsemeat issue. It seems there is little admission of the scale of the problem or how long it has been going on for. All I can hope is that recent events will speed up the will to look again at the tripartite agreement. Something radical needs to happen about the welfare and slaughter issues at the heart of this trade, let alone the dangers for us humans the consumers. You can view the segment at the link below.