Ear to the Ground and ten years later.. 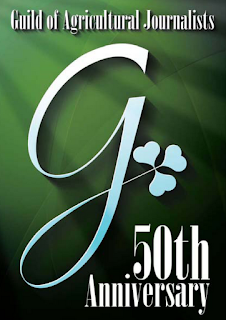 I was very excited to hear this week that I have been shortlisted in the Guild of Agricultural Journalist's Awards for "Best Online Journalist". This is a huge thrill for me. I started Basketcase two years ago to keep up a discussion on issues affecting farming, food and rural life in Ireland. As you've gathered, the blog is written for anyone interested in food, where food comes from and the affect that food policy has on farming families and people who enjoy the countryside.

Being nominated is a huge honour. Many years ago I produced a TV programme which won a Guild award for Best Television Programme. Myself and journalist Mairead McGuinness (who is now a MEP) travelled to Holland to investigate the dioxin crisis there as part of the "Ear to the Ground Investigates" series. Our programme won and we went on to make many more investigative programmes where we tackled harder stories about the food chain and food policy. They were great times and great stories.

I learned a huge amount about both producing and writing from working with Mairead who at that time was editor of the Farming Independent. Mairead was hard to please but rightly so. Information had to be correct, properly researched with no stone left unturned. In fact it wasn't a story until at least five phonecalls had been made on it which is a pretty good rule I still tend to follow. It then had to be developed, and shaped into something that made sense quickly to readers or viewers with care and the correct emphasis. I then went into RTE television and radio where I produced and directed entertainment and current affairs programmes. Over my time there I directed shoots in France, UK, Belgium and Thailand and became more hard-bittened and cynical about the business. I interviewed both Bertie Ahern, and Beyonce, neither of whom made much sense.

The best moments are the things people say off the record. And sitting opposite Condoleezza Rice on George Bush's visit to Ireland on the Washington Press Corps bus, because it was the only posh coach with a toilet. Being in the right place at the right time always helps.

Like many people I found my creative and journalist impulses flattened by working inside a large organisation like RTE. At that point I got out to concentrate on writing. I still return to Montrose to contribute on food and farming on Radio One's Today with Pat Kenny and Countrywide, and to chat at people's desk and get the gossip. I also report for television - last season on The Daily Show, The Consumer Show and earlier this month at the Dublin Web Summit. Going in and out of television is a whole lot better than working there full time. And there's nothing like the very off the record craic you have on the road with a crew.

I'm still quite old fashioned about how I work and when I see "holes" in stories or information that is simply incorrect it drives me mad. Opinion is not reporting, but the lines between both have become hugely blurred now with web publishing and the huge splurge of content available to us. Blogging is a great medium but not when it's simply selling product. Many food blogs unfortunately have become spin shops for food brands; great for PRs, but not great for readers. There is still great writing and journalism out there, you just have to look harder for it.

When I worked on Ear to the Ground Investigates I was delighted our programme won a Guild award but to be nominated for my blog is much more a personal thing. Farming journalism in Ireland is of a very high standard with publications like the Irish Farmers Journal, the Farming Independent and Farmers Monthly writing content specifically for those who farm be it in the poultry or suckler to beef sector. These papers are vital to the farming community and for me they provide news, features and comment across all the different types of food production which in Ireland are widely varied. They also provide very strong technical content whether you are looking at upgrading your milking parlour to changing your AI to improve productivity.

With Basketcase I try to write for those both inside farming and also outside it and give a picture of how farming policy affects consumers and those who are interested in food provenance, development issues and the environment.

My print work at the moment can be found in the Farmers Journal, the Irish Independent consumer pages on a Thursday and in The Gloss magazine every month as part of The Irish Times. For The Gloss I write a food column "This Edible Life" which is the more fun, and dare I say the sarky side of both myself and the food business. I am also continually involved in TV - we made two "What's Ireland Eating" documentaries in the last two years and we have other projects in development. I don't write much about my personal life in my blog, and sometimes there is a pressure to do this if you are a journalist as personal information is of interest to people and gives them a window inside your life. I try to keep my family life fairly private but I do hope to write more about one personal project I am involved in that relates very much to Irish rural life so keep a watch out for that. Basketcase may have to produce a sister blog if I find it's of big interest to readers.

The awards ceremony is this Friday the 9th November so I'll have to pull the hay out of my hair (literally) and get the glad rags on to attend the awards dinner which I'm really looking forward to. It's always great to catch up with old colleagues, editors and people in the same field. Writing for me is a quite solitary job apart from when I'm on farms or visiting food businesses. It's nice to connect with people in the same field and start taking notes on the back of a napkin like several of us ended up doing at a recent awards dinner. While journalists are great at talking, they'll never miss out on a good story...

http://www.farmersjournal.ie
Posted by suzanne at 6:17 AM