Organic champions, and going back to our roots 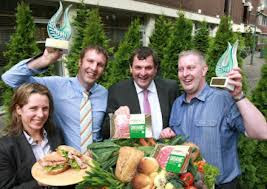 I was delighted to be a judge at this year's Bord Bia National Organic Awards. After all, spending
a day eating and drinking fine food and drink... me? Never...
What was particularly interesting in sampling and examining all the shortlisted entries was the development that the organic sector has experienced in the last ten years; it really has been phenomenal. Yes it's only a small part of the national grocery spend, but as a sector it has developed large successful brands like Glenisk and also promoted Irish artisan food businesses in general.
When I was a producer on Ear to the Ground in the late 1990s I remember an editorial meeting about an organic cheese story we were planning to shoot. We vacillated over the decision as we felt for a farming programme organics were considered niche and outside the box. The situation is totally different today. We know that the marketplace for organic food in Ireland is worth 104 million euros annually. In Germany one in every five euros spent on food is spent on organics. There's no reason why we can't grow our domestic demand and also our share of export product in Germany with the expertise and development farmers and producers here have built over the past decade and more.
Crowes Farm (pictured above and below) won the overall award for their dry-cure rashers. The Crowe family have been farming in Tipperary for over a hundred years and switched over to organic certification in 2007. They now rear and butcher their own pigs (TJ is the butcher in the family) and their short listed rashers were pretty outstanding. We felt this product really deserved the overall award as it just had great eating quality. As it's low in salt and added water it didn't leave the customary mess when cooked. It tasted of good quality pork, not nitrates. Imported bacon which is a problem for Irish pig producers has even

higher levels of added water and nitrate than is allowable in bacon processing in Ireland. So many consumers are eating something which doesn't resemble any type of pig meat but a white mess on the pan, and has shrunk to one third of its pre-cooked size.
That's why Crowe's bacon impressed; it looked and tasted great. The packaging was also simple but contemporary. Many of the products we judged had too much or too little information on the labelling and while I know it's something that's difficult to get right, it's really important for the consumer who pulls that product down from the shelf. I chatted to TJ after the awards ceremony and when I complimented him on the labeling he said it had taken months with the designers to get right. Goes to show hard work pays off. 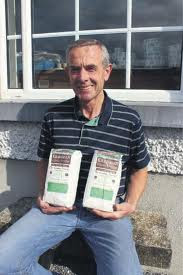 While there were plenty of unusual foods short listed in the awards we felt as judges that some of the most notable were traditional Irish foodstuffs - Crowe's bacon, Pat Lawlor's porridge oats (pictured right) and Keogh's potatoes; all of whom also won their category. It chimes with where we are economically that the foods we are turning to and interested in again are far from complicated and Irish to the core. If it's a sign we're going back to basics then that can only be a good thing.
Congratulations to all the shortlisted entries and award winners, the quality of everything we judged shows a vibrant organic sector which in uncertain times, is still ploughing ahead offering great food, great food stories and food on the plate that you really want to eat.
Posted by suzanne at 12:24 PM