Would you pay more for non Genetically Modified food? 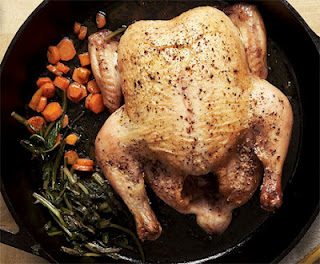 In the UK, Morrisons, the large supermarket chain has dropped its requirement for poultry suppliers to feed non GM food to their chickens. They say it's a cost issue for producers, and here in Ireland it's certainly the same.
So we as consumers want to pay less for our chicken fillets, we have to accept that poultry here is fed with genetically modified food. In fact feeding chickens, pigs or cattle non-genetically modified feed is significantly more expensive than the more commonly and cheaply available GM feeds. So do we care as consumers?
Apparently not. Most of the animal beef, chicken and pigmeat we eat in Ireland is fed with GM rations. The only way to absolutely assure that you're not eating animal products fed on GM food is to buy organic. And that obviously has an expense premium attached.

The Morrisons announcement comes just as the debate on Teagasc's plans to grow GM potatoes at its Carlow research centre is hotting up. If you want to know more about the issue check out my interview on Today with Pat Kenny at the link below. GM is a complicated, emotive topic. This radio piece focusses primarily on Teagasc's plans and gives an overview of the issue. You could do hundreds of hours of broadcasting on GM and still not come to agreement between those who support the technology (Teagasc) and those who hate it (GM-Free Ireland) and other groups.
It's very much the case that GM has a sorry history in the US and needs to be hugely regulated and watched as a developing technology. Does it have a place in food? You have to make up your own mind.