Feed your tourists well, they have feelings too 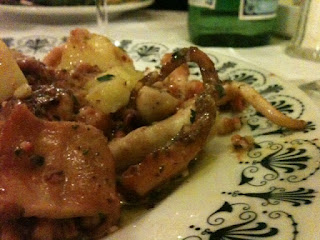 Rome is a magical city and as food goes, it has some of the best in the world. After spending a few days there last week, I pretty much ate my way through the city, with the highlights being polpo con salsa (pictured left),
Saltinbocca (veal and bacon) and swordfish carpaccio which are Roman specialities.

Like most heavily-touristed cities, most of the food around the busy areas like Piazza Navona, the Spanish Steps etc is pretty rubbish. A lot of the dishes are microwaved or re-heated from earlier servings. One reason for this is that restaurants pay extortionate rents to be in tourist areas. So to make it work financially, they serve the cheapest ingredients possible with plenty of cut price techniques. Staff are usually unskilled and you wouldn't want to look too closely at their kitchens.

Roman restaurant law is also pretty hard on businesses. You have to 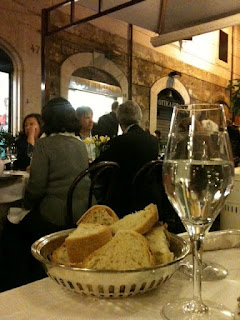 pay two months wages in June and December, and another months worth into social security. At the fabulous Fortunata de Pantheon (pictured right and below) the owner explained how rents were killing Roman food and that it was hard to find good value in the city that wasn't "caca". Fortunata is one of Rome's best loved restaurants, and it's walls are adorned with photos of it's favorite customers - Helmut Kohl, Ronald Reagan et al.. He also made the point that only massive ,attention to detail kept their business as popular as it is, despite opening its doors decades ago. When the family opened five franchises around the city they eventually sold them off, as it became clear that they couldn't deliver the same level of quality served in their main restaurant. As the food wasn't the best it could be, they didn't want their name over the door, so they got out. Take heed Gordon Ramsay et al... getting bigger is often the kiss of death in the restaurant business. 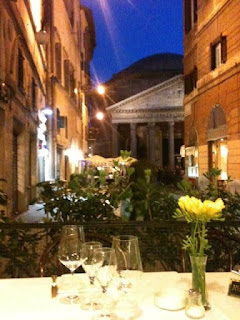 One lovely thing about Rome is the value for money in food. At Fortunata de Pantheon most of the mains were between 10 and 20 euro, and the food was breathtaking; everything had huge flavour and the ingredients just screamed freshness and quality, from the ricotta stuffed zuchini flowers to clams that tasted of the sea in the spaghetti vongole. Ristorante di Tirambo on Piazza della Cancelleria was another great recommendation. I had a tartare of Piedmontese beef with black truffle and sheeps cheese. A carpaccio of vegetables with shrimp was also beautifully balanced, very simple but super tasting. Again this was a great value place with food which you simply don't get the chance to taste in Ireland. It's also gorgeous to sit outdoors in the fading evening sun and to be in a city that is one of the most beautiful in the world. 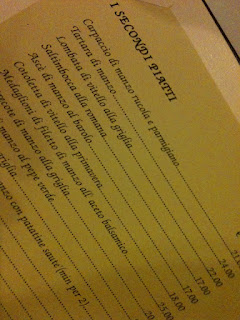 Everyone should go to Rome at some stage in their life, and if you haven't been, it's a fantastic destination for those who like their grub. But stay away from eating on the main tourist squares and anywhere with a waiter wandering outside trying to get you in the door. You'll leave significantly lighter in pocket and could have an eventful holiday spent largely in the confines of your bathroom.
And it's a trend seen in most cities. Food designed for tourists is often pretty awful, you only have to think of Temple Bar to see this is also the case in Ireland. With a few exceptions, we tend to think that tourists don't notice bad food, but it's a costly mistake. Tourists who eat well are more likely to remember their trip fondly and recommend the destination, and the restaurant to others. So the lesson is, feed your tourists well, after all, they have feelings too.
Posted by suzanne at 1:05 PM