Would you eat meat that was grown in a lab? Even if it solved world hunger? 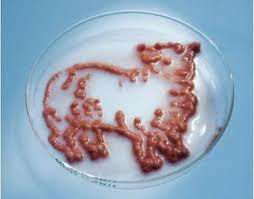 Winston Churchill - bon vivant and lover of food, drink and the odd giant cigar, once offered a view of the future where meat would be grown not on a farm, but in a lab. Churchill wrote: "We shall escape the absurdity of growing a whole chicken in order to eat the breast or wing, by growing these parts separately under a suitable medium.''
While it sounds very Orwellian and proves that Churchill wasn't just handy at moving model armies around a giant map table - now, eighty years after his pronouncement, Churchill's predictions are coming to pass. Scientists are close to producing the world's first commercial meat grown in a lab. Mark Post of Maastricht University, one of the premier scientists in this field, claims he will produce the first "cultured meat" burger by the end of the year.The question is, would you eat it?
Most initial reaction will no doubt go along the lines of "Hell No!!!"
After all, lab grown meat is grown from stem cell technology, a science that makes a lot of people squirm as in the first place, let alone, suggest they eat the results. In order to grow "cultured" meat, stem cells are taken from pig or poultry muscle and then cultured with added nutrients to form a film of animal flesh. Think - chicken fillet, only thinner.
If you're at this point pretty repulsed by the idea, think of the following reasons for why lab-grown meat could be better for animals and also, better for people.
Growing meat, whether in factory farms or out in fields, is one of the major contributors to global environmental degradation, especially de-forestation and global warming. It uses up water resources and has contributed to huge loss of biodiversity. Currently our appetite for meat has meant that almost one-third of global land use is used for growing either meat, or cereals to feed meat animals - including cattle, pigs and poultry. You could argue (and plenty do) that our lust for meat, and the growing "middle class" appetite for meat in China and India is killing the planet. 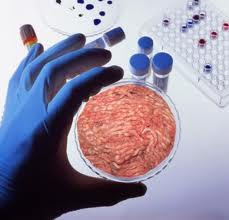 And how does the alternative stand up? - research shows that cultured meat has 80-95% lower greenhouse gas emissions, 99% lower land use and 80-90% lower water use compared to conventionally produced meat in Europe. More importantly, even if the meat produced by factory farms (which certainly in the US and in some cases Europe, have proved to have dubious records for animal welfare) was replaced with cultured meat, it would take the horrors of large scale factory farming out of the food chain. If people don't want to look at video of where their chicken is produced well then they probably would be better off served by something grown in a lab.
But the real issue comes when you look at world hunger. Cereals are grown all over the world not for people to eat, but to go into animal feed. And this is the case even in developing countries where hunger and deprivation are serious issues. Cultured meat, (given that over time it would have to be produced at huge levels) would mean that less cereals leave the food system for animal feed and instead can be given to humans, yes - us, to eat.
So what about it? Would you eat it, even if you knew it was morally and ethically more correct?
Posted by suzanne at 12:30 PM