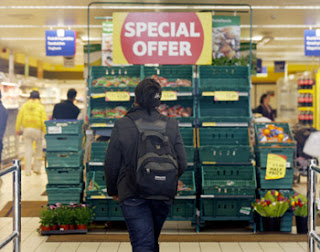 After a fabulous Friday spent at Savour Kilkenny I'm firmly back in the real world after discovering a food news shocker today. I should have known that after a lovely interlude of chatting with author Colman Andrews about locavores, eating Goatsbridge trout and Knockdrinna cheese with fantastic wine pairings in Mount Juliet, things would come down to earth with a bump via my old nemesis - the supermarkets.

Tomorrow morning I'm reporting on the Kenny Show on Fat Tax and how Denmark is reacting to its first month under the new expensive food regime. Aside from the expected consumer complaints about more expensive processed food, dairy and meat products, the real shocker is that the supermarkets there have taken complete advantage of the new law and are charging as much as 15% more on products such as butter and cream, on top of the 6% or so mark up from the fat tax itself.

This is profiteering on an outrageous scale and again there's no measures or legislation to stop them. Not only are the Danish chains involved in this desception but also Aldi and Lidl which operate here in Ireland. Sometimes I think I'm far too cynical about supermarkets but this new piece of skullduggery in action blew me away. And what would happen here if a fat tax was introduced? Exactly the same thing, particularly as we've no supermarket ombudsman or protection from this sort of practice.

What's the point of having any kind of public health policy if supermarkets use it as a tool to rip off consumers? I'll be going through it in detail after 10am on RTE radio one tomorrow and will put an audio link up here on the blog later.
Posted by suzanne at 8:30 AM