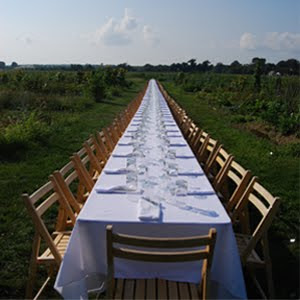 Who doesn't love a picnic, especially when it looks as gorgeous and as simple as this: one field, one long table, with all the food on that table supplied by local farmers and food producers.

I first came across the "Outstanding in the Field" long table dinners a couple of years ago via Condé Nast. Typically Vogue, or whatever publication I spotted it in, was wooed for the same reasons as everybody else - beautiful images, beautiful food and a brilliant but simple idea, executed with elegance and chutzpah. It made great editorial, and great images sell magazines. But behind the gorgeous visuals and were a bunch of genuine hardworking people: Outstanding in the Field were the real deal. 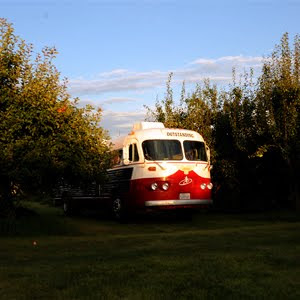 Started in America in 1999, Outstanding in the Field began as a series of long table dinners on farms in California. The key was to bring local food to the table in places where local food wasn't available in shops and supermarkets.

This is still something very relevant not only in the US but in Ireland. Plenty of us live within two to twenty miles of a farm, but haven't the first idea of how to actually buy the food grown there - saving the miles of travel, food spoilage, and the need for a middleman in the shape of the big retailers who control most of what we eat.


So the idea of the long table dinners was to bring together both consumers and producers of food. Very simple, and it's both surprising and sad that such a thing is a rarity in the way we all eat and procure food. This is something I try to do myself but the routes to market for farmers aren't always simple and connecting your produce with people who want to buy it is often difficult. Last week I bought half a lamb from my neighbours farm in Newcastle County Wicklow. It will be cooked this weekend for a lunch in our house that will feed around 60 adults - quite a task that I am, em, meant to start preparing for today. 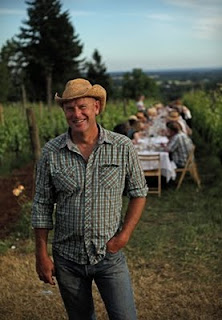 We all have to start somewhere, and the Outstanding in the Field dinners have grown from a small group of enthusiasts into a huge food advocacy movement. Since their beginnings in California they've hosted long table dinners on farms and rural locations all over the world. They've had events in barns, in libraries, museums and on beaches. The theme of each dinner is to honour the people who bring nourishment to the table; and everyone sits down to eat together.


For the first time, the group are coming to Ireland and hosting a long table dinner at Ballymaloe in Cork on the 5th of September. Their message is particularly relevant at the moment as the US is currently the locus of so much bad news on food and farming - the "Ag Gag" bill banning journalists from recording inside factory farms and the huge dominance of the meatpackers (it's said now that Cargill isn't part of the food chain, they Are the food chain). In the US, campaigning for alternatives to "Big Food" have given birth to movements like Outstanding in the Field, and hopefully what happens in the US can have an influence on food advocacy here.

Check out more on the event and the organisation at the link below. As far as I know there are still tickets available. I'll be there, and am going to enjoy every minute of it. And for those of you who fancy a piece of Wicklow lamb, check out www.sweetbankfarm.ie
http://outstandinginthefield.com/events/2011-tour/

For more on the dinner and Ballymaloe Cookery School - http://www.cookingisfun.ie/

Enough procrastination, time for me to get into that kitchen..