The real price of a cup of tea 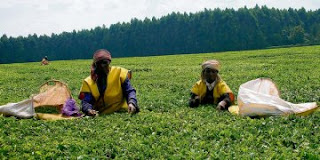 Yesterday's Irish Times published a story I'd been working on with journalist Jody Clarke for a couple of months. I'd discovered that Lyons tea (the biggest selling tea in Ireland), has a plantation in Kenya where women allege that in order to secure lighter work duties or better housing conditions for their families they are forced to have sex with supervisors.

I researched the story, interviewed the principals and then journalist Jody Clarke who is based in Kenya then came on board. He travelled to the estate and interviewed women who had worked there. They told him about how the supervisors demand sex, bribes and harass the older women. Lyons Tea who are owned by the giant Unilever food group say there is no problem with sexual harassment at the estate and that they disagree with a report compiled by Dutch organisation SOMO which alleges that women on the estate suffer poor working conditions and "rampant" sexual harassment.

Working conditions for women at Kenya's tea plantations are generally poor, but the real problem with this case is that the Lyons Tea Kericho estate is Rainforest Alliance certified. Rainforest Alliance say that they say their audits of working conditions on the estate have found no problems. Generally as consumers when we buy a Fair Trade product we assume that workers are being looked after and are not suffering the kind of problems which the Kenyan women allege. What I found writing this piece is that what we might consider to be an ethically produced product may not be the case in reality. If you're interested in this issue you can read the full piece at the link below.