How to survive a bullying on twitter - I blame the lambs 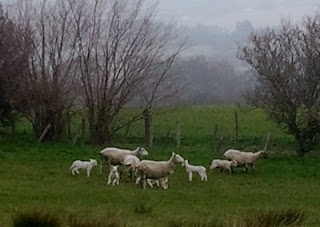 In my innocence I thought that most people knew that meat came from an animal. That it is born from a mummy animal, grows up, eats grass and is killed before it arrives on our plate as food. I guess not.
Last week I tweeted that seeing the newborn lambs in the fields around my house made me think of Spring lamb, which in turn sent me into the greenhouse to start watering my mint plants. Now this may be the behaviour of a rampant animal hater but hey, I simply like eating lamb.

Anyway, a while later someone responded to my tweet saying that I was a "sick and pathetic" individual. This sent me into paroxysms of excitement as obviously I had committed some truly awful deed in the league of Hannibal Lector. When I realised it was related to the lamb comment I (a) spent a long time laughing and (b) watched the twitter responses to the lamb issue get completely out of control and result in a lot of people taking deep offence.

The fact of the matter is that if we choose to eat meat we cannot ignore the facts of how that meat is raised and killed. And if we are grown up about it, we have to realise that burying your head in the sand doesn't change how animals are farmed and slaughtered. Farming is how food is produced and in terms of my daily life I live pretty close to the realities of it. Our house is sandwiched between two sheep farms which are currently midway in lambing a thousand lambs. Yes, a thousand. Some will be killed at twelve weeks old and sold as "spring lamb" - very young tender meat. Others will be killed at any stage up to about one year old, the rest will become replacement ewes (mothers themselves) and some quality males become breeding rams. 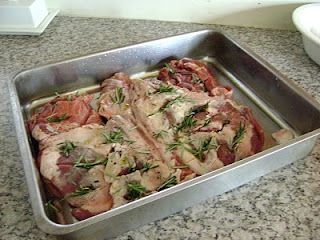 This is what happens to lambs. The way I reconcile eating lamb with the gorgeous little creatures gambolling around in the fields is that Irish sheep and lambs live as natural life as possible - outdoors, eating grass and in social herds. It is very different to the feedlot system often seen abroad where livestock live indoors, eat concentrate feed derived from maize and soya, with the biggest of these operations being essentially "factory farms".

Last year I bought a whole lamb killed at about 5 months old from Sweetbank Farm in Wicklow. (Some of it is pictured above) Their lamb is organic, grass fed and for me buying from farm gate from a farmer I know makes me feel what I'm eating is as ethically produced as possible. If I feel that certain meat is not produced with care towards animal welfare then I don't buy it, it's as simple as that.

I think we have to be real about food, know where it comes from and make a choice. It's interesting that if most consumers knew how their meat, especially imported chicken meat was produced they would probably not eat it. And as for twitter, you can follow my disgraceful views on food at @campbellsuz. I will atone, I promise.
www.sweetbankfarm.com
Posted by suzanne at 2:43 PM