Black chicken for Halloween, anyone? 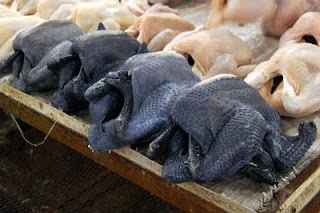 Yes it looks scary, but apparently black chicken meat is the next big thing. American chef Rick Moonen recently thrust black chicken into the spotlight after he made it into a mousse for his stint on Top Chef Masters (the US equivalent of Masterchef).

The black chicken he used is a Silkie hen - a variety of small hen which are prized for their fluffy feathers, large tassled Ugg-boot style feet and are much beloved of serious fowl fanciers who bring their beloved Silkies to shows up and down the country. I've often been told that Silkies are great layers and make lovely hens for home use, but I've never seen them on a plate before.

This particular Silkie has bones and flesh that are the shade of onyx; apparently it has a genetic combination that gives it it's unique colour, and it has a rich, gamey flavour to match.

It's a fantastic look for Halloween and I'd love to know if anyone in Ireland produces this Silkie for the pot, please let me know. Apparently the Chinese have for millenia eaten black chicken (which in China is called wu gu ji, or black-boned chicken). For them, putting the dark poultry into a stew or soup is a great remedy for curing colds, cramps, or a headache. This ties in with the Jewish tradition of using chicken soup to cure all sorts of sickness - apparently in the soup's droplets of fat lie unique qualities to boost immunity, so if someone tells you to eat chicken soup next time you're sick they may be on the right track.

So if chicken soup is a superfood, black chicken soup might even be better. Would love to get my hands on some of these black-fleshed Silkies, anyone with info, send it my way!
Posted by suzanne at 8:49 AM