The best chutney recipe ever 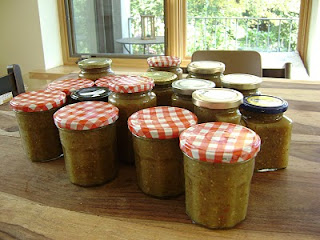 This time last year I vowed never to grow tomatoes again. You have to water them non-stop, re-tie them regularly as they fall over, and at the end of the day all they produce is bucket loads of green unripe fruit.
Despite lots of heartbreaking appeals to the tomato God, by last November winter was really setting in and it was time for to harvest our green, definitely not red, stock of fruit. No matter how many paper bags we put them in, or how many days they sat beside over-ripe bananas, the tomatoes just weren't ripening, then we had a piece of luck.
We found this recipe for Green Tomato Chutney on Caroline Hennessy's brilliant Bibliocook blog. I could lie and say that it was me who stumbled across it but actually it was Philip. Caroline had given our book "Basketcase" a rather nice review on her blog so in turn we decided to nab her chutney recipe and give it a go.

So finally, we had a home for all those green tomatoes. Alongside Bramley apples from the garden, a net of onions, some vinegar and sugar, we had a fabulous chutney. We put jars of it in the basement, and it kept us going all year - delicious on its own on a slice of toast or as an accompaniment to a cheese board. It has a creamy softness without that vinegary tartness that some chutneys have. It tasted fantastic, and unless our friends and family are brilliant liars, the jars dispersed to all and sundry seemed to go down very well.
And so came tomato harvest time again this year. We had three varieties - marmandes, ferlines and a cherry tomato, NONE of which ripened, despite much better sunshine this summer and a lot of care. So we gave in and took the green fruit inside once again, boiled up the tomatoes and apples and set about making the chutney. 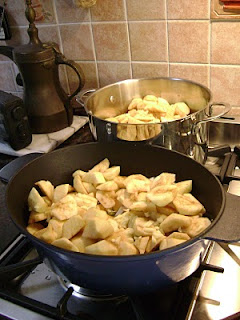 After chopping the tomatoes and apples it's dead simple; chuck it all into a few large pots, bring it up to the boil and then leave it on some low heat and wait. The fruit softens and becomes a lovely goey chutney mix. You can probably make this with ripe tomatoes as well, so it's a nice recipe for some comfort winter food that will store well and keep you going all year. After moving house and being without a cooker for over three weeks, it was great to see pots happily simmering on the hob and steam vanishing up the extractor fan, all credit to Smeg who at least seem to at last have delivered us a cooker worth waiting for.
Now all we need is a decent phoneline and some mobile coverage, unless I start doing smoke signals from the top of the hill, we may isolated for a while. Maybe sometimes that's no bad thing...
Green Tomato Chutney
Green tomatoes - 1kg
Apples - 1.5kg, peeled, cored
Ginger - about 2cms, peeled and finely chopped
Fresh chillies - 2, finely chopped
Sultanas - 225g, chopped
Onions - 500g, chopped
Salt - 2 teaspoons
Demerara sugar - 500g
Malt vinegar - 500ml
Mustard seeds, or Dalkey mustard which we used - 1 heaped tablespoon
Put all the ingredients into a large, heavy based pan. Heat gently, stirring, until the sugar is dissolved. Simmer, stirring regularly, for 2-3 hours until reduced to a thick, rich pulp. When the chutney is ready you should be able to draw a wooden spoon through it and see the base of the pan for a few moments.
Decant into warmed, sterilised jars, - just simply wash them and leave them in the oven for a while to blast them germ-free. Cover and label. Store in a cool dark place, allowing to mature for at least a month before using.
Makes approximately 10 jars.
Posted by suzanne at 6:18 AM