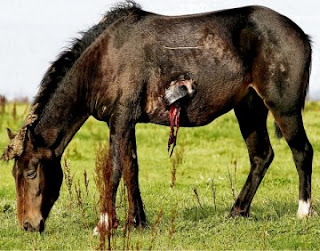 As a countryside lover it's easy to fall in love with horses, and if you ride or look after these lovely animals its very hard to ignore the huge welfare problem we have in the horse sector in Ireland.

Today the Irish Times published a piece I've written for them on the complex and ugly issue of equine welfare and why no one is willing to take ownership of it. I really hope it brings some pressure to bear on the department of Agriculture to provide emergency funding to the horse charities this Winter or to provide a cull scheme, ideally both.

If the problem is being reported as far away as Switzerland and New Zealand, it's clear we've a crisis on our hands. If we don't sort it out our image of being a horse loving, and great horse producing nation we only have ourselves; the Irish to blame. Please, Government bodies, help us do something about it.


The number of starved and abused horses is rising. As winter approaches and charities are forced to turn animals away, is a cull the only way to clean up Ireland's horse welfare mess? Suzanne Campbell reports

IN A STABLE yard in Co Wicklow, a small, emaciated thoroughbred mare stands dejectedly with her head almost touching the straw. Much of her coat has fallen out and her spine and ribs protrude from distended skin resembling the bare timbers of a boat.

“This mare is typical of what we’re seeing at the moment,” says Sharon Newsome, who runs the yard. “She’s starved, but actually she’s a well-bred horse.” In another time the pretty filly would probably have been in training on the Curragh – but not today.

Newsome runs the Irish Horse Welfare Trust (IHWT), a charity under immense pressure to clean up the mess left behind by the Celtic Tiger’s surge in horse ownership. While in the past decade the leisure horse industry flourished, it was racing which really expanded, as hundreds of syndicates of both elite and ordinary folk seized their moment to live the dream. From 2001 to 2006 the number of racehorses in training in Ireland increased by 22 per cent. When the economy collapsed, trainers’ fees weren’t paid and fields full of horses suddenly had no owners. Culling horses may now be the only way to reduce the number of cases of starvation and abuse.

Alongside our banking woes, Ireland’s horse welfare crisis has put us under the gaze of the international media. Earlier this month the Sunday Telegraph joined Swiss Television (Schweizer Fernsehen) and Horse and Hound magazine in airing Ireland’s horse welfare problems. To read in a foreign newspaper that a horse in Dublin “was recently found with its legs bound, sunk to the bottom of a river” is to be presented with an image at odds with the sleek and glossy one that the €1 billion Irish horse industry likes to present.

As winter approaches, welfare groups project that hundreds of abandoned and starving horses will be found countrywide. In the case of the thoroughbred mare rescued by the IHWT, her owner was an elderly man who didn’t want to part with her even when a member of the public called gardaí and asked them to seize the horse.

“The problem is that now we have no room for even seized animals – the bad cruelty cases or starved horses like this one,” says Newsome. “I dread answering the phone or looking at our email because there are so many people desperate to get rid of horses.”