And I thought salmon was naturally that colour 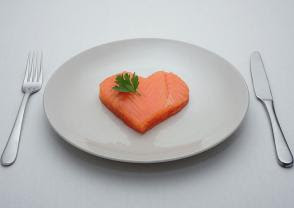 Smart Consumer: The unpalatable truth about the salmon on your plate
By Suzanne Campbell
Thursday September 23 2010

Close your eyes and picture a salmon. Odds are that you think of a gleaming muscular fish leaping up a river in full flood. It's this image which informs our decision making at the fish counter.

We also think of salmon as a healthy food -- rich in omega-3 fish oils and a tasty source of low-fat protein. But a new book by American food writer Paul Greenberg probes into the image of salmon, revealing some uncomfortable truths about Ireland's favourite fish.
More than 99% of the salmon sitting on Irish supermarket counters and in delicatessens is farmed.

Some of it is Irish fish but most of what we eat originates in Scotland or Norway.
Wild salmon is scarce around the world and with the ban on drift netting in Ireland, it's now out of reach for most of us and will only appear on the menus of very good restaurants or in small quantities at specialised fishmongers.

The fact that we are eating almost exclusively farmed salmon doesn't seem to affect our appetites for it. What Greenberg points out is that while salmon has obvious health benefits, questions have to be asked about what eating farmed salmon does to the availability of other fish. The book also shows how our demand for cod, tuna and sea bass led to their shrinking availability.

But for Irish consumers who return to the fish counter again and again for salmon, what does he say about how healthy a choice it really is? Salmon from fish farms are artificially spawned, reared in pens with thousands of other fish all swimming tightly together in circles and fed a diet that contains colorants to make its flesh pink. There's little natural about a farmed salmon except that it's still living in water.

Even less appetising is that farmed salmon are fed pellets made from ground-up wild fish, mixed with soya and cereals -- not quite its natural diet. The pellets also contain a pigment to colour the salmon's flesh; the tone depends on the country the fish is destined for. So you'll find farmed salmon in South America very red in colour, whereas we in Ireland prefer it a soft pink.
Critics of farmed salmon find this 'Dulux colour card' approach enough reason to boycott it, but the fish farming sector claims that the colourant is nothing more than a natural carotenoid pigment named astaxanthin; exactly the same molecule that wild salmon get from eating small shellfish.

Astaxanthin is now made in a laboratory rather than by shellfish, so what are we worried about? Aren't many of the foods that we eat artificially coloured? Or is it just that colouring the flesh of live animals crosses some kind of line?

Of more impact is the colossal amount of other fish species that go into creating the fish pellets farmed salmon eat. Greenberg points out that it takes up to six pounds of wild fish to produce one pound of salmon and that part of the problem with the world's diminishing fish stocks is this hoovering up of other species to feed our insatiable appetite for pink fish.

The farmed salmon currently on our fish counters has also been genetically selected to have a quicker growth rate. Since the Norwegians pioneered farming salmon on a mass scale they've engineered a fish that has double the growth rate of wild salmon. This super salmon matures faster and dominates salmon production across the world, so much so that three billion pounds of farmed salmon are produced globally; three times the amount of wild fish harvested.
While this may be hailed as a breakthrough by fish breeders, this immense salmon production has been at the cost of the nine billion pounds of wild fish that have been caught and ground into pellets to feed them.

Greenberg points out that as humans have been farming salmon since the 15th Century you'd think we'd have got it right by now, but sadly mistakes have been made.
Blood meal from chickens was routinely fed to salmon to provide micro nutrients and only banned after BSE came to light. Fish were also crammed into cages that were too small and sea lice proliferated, affecting other species.

In Ireland, Scotland and Norway, studies found that the presence of salmon farms increased the level of sea lice infestation on sea trout. It also badly affected Irish wild salmon.
But most detrimental to the image of farmed salmon was the extent to which they were found to contain PCBs -- polychlorinated biphenyls, which came to light in a report published in 2004.
PCBs are toxins which have found their way into fish from run-off into rivers of waste from manufacturing plants. They accumulate progressively over time meaning that those at the top of the food chain -- humans -- are exposed to the highest levels.

In the research published in the journal Science, farmed salmon was found to contain higher concentrations of PCBs than its wild counterpart. PCBs were subsequently banned, but not before confidence in farmed salmon had taken a hit. Many Irish fishermen still claim that the waste from salmon cages is not sufficiently washed out to sea and affects the local environment as waste pellets and faeces fall through the nets onto the seabed underneath. The Irish fish farming sector claims it's one of the cleanest in Europe as it is located in strong Atlantic seas which quickly get rid of the waste.

How to spot the best fish over the counter -

Salmon farming will continue to grow all over the world, despite its detractors. If you want to still eat fish with strong health benefits that doesn't wipe out our future choices of seafood, here are some alternatives.

For fish rich in Omega-3 oils, buy anchovies, sardines and mackerel. Mackerel and herring have healthy populations in Irish seas and have plenty of flavour; even when grilled and served with a simple salad.

Ling, blossom and coley are cheap substitutes for cod. They are so close in flavour, texture and appearance to cod that they have been found to be labelled and sold as their more expensive cousin.

If you really want salmon, ask for salmon that's farmed in Ireland at the fish counter of your supermarket or delicatessen. 75% of salmon produced in Ireland is organically certified, so not only is the cereal feed organic, the fish component of the pellets is of a low percentage and comes from monitored fish stocks. The stocking density in organic salmon cages is also less dense.

Buy fish in M&S -- they have been rated the leading retailer for responsible fishing by Greenpeace and only stock tuna caught by the pole and line system which is more sustainable.

Look out for the Bord Bia Seafood Circle mark at the supermarket fish counter or at the fish mongers. These fish sellers are the most educated in terms of the quality and source of the fish that they stock, and can give you the best information about what's fresh, in season and how to cook it.

Suzanne Campbell for The Irish Independent

Four Fish by Paul Greenberg is published by Penguin. Suzanne Campbell's food blog is at www.basketcasetheblog.blogspot.com
Posted by suzanne at 8:40 AM