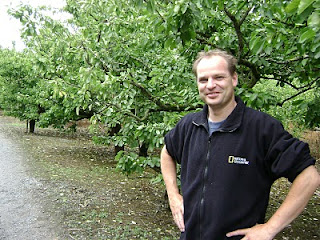 Just back from a lovely trip to Tipp - one of those long hot days in the car where you arrive home, slam the car door and think - phew, great to be back, but I'm so glad I went down to see those people; they really opened my eyes. There's something special about travelling to meet people in their own homes or place of work, you really get a sense of the issues they are facing and the hard work they are putting in keeping small businesses going in difficult times.

I was interviewing Con for a piece on RTE's Countrywide and we ended up spending several hours walking around his orchards and talking about apples and soft fruit. His farm as is one of the longest standing fruit growing businesses in the country. His parents came from Holland in the 1950s and they have farmed at that location since. Not only have they apples growing commercially but also strawberries, rasberries and other soft fruits, they make their own fruit juices, run a farm camping business and a successful farm shop.

He showed me some of the old Irish varieties of apples which are getting rarer and rarer in Ireland. They are beautiful apples - some a rich red in colour, some pale green, he had over 60 Irish varieties alone. Sadly, many Irish apples bruise, aren't the right colour, don't hold an even texture or have some other kind of small flaw that has made them obsolete in a commercial sense. This is the reality of growing apples on a big scale. Personally I'm sick of "Pink Ladies" from China and tasteless "Granny Smiths" from Chile, the fact that Irish apples aren't available in supermarkets constantly amazes me. Could they not even stock them in small quantities? We have apples at home and just now I'm looking at the tree and looking forward to their unique sweet, but discreetly tart taste. It's a shame that we've let Irish varieties vanish from our shelves. But just because an apples looks like something out of Walt Disney, it may not neccessarily be that good for you.

Con told me how apple growers are leaving the sector in Ireland because of cheap imports, they cannot compete with a Chinese apple which costs next to nothing to produce. You might say this is great for consumers, but what do we know the production standards for Chinese apples - what pesticides and herbicides are used? This is tightly controlled in the EU, not so outside of it. And what are the workers paid who harvest the apples - it's not even worth thinking about.

Fruit growing in Ireland will cease to exist within one generation unless we as consumers look to buy Irish product. It may be a few cents more expensive but what you're getting is quality product produced under safe food standards and where workers are paid a healthy wage. If we ignore Irish fruit and go for the cheapest option, we won't be able find it in the shops in several years time, and ultimately, we will do ourselves out of the option to buy fruit produced in Ireland.

More pictures of Con's farm on my facebook page
Posted by suzanne at 5:06 AM