Hey, she's wearing the same gardening outfit as me 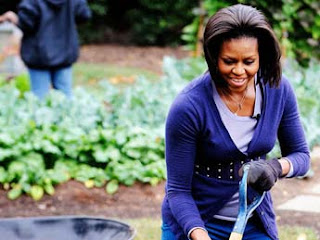 Michelle Obama's food garden at the White House will stay with me as one of the most lasting images from her husband's presidency. Most political careers end badly, but her passion for doing something to address America's food wasteland and obesity crisis shows a force for positivity and real passion that go hand in hand with her husband's vision. No matter what happens the presidency, Michelle Obama is a force for change and has brought a whole new level of expectation to the role of the president's wife.


Today, Michelle launches her Let's Move website to bring attention to eating, cooking and food sourcing in the US. I've seen her talking about this and she really is inspirational, particularly because she doesn't try to be something she's not, just a mother who found herself on the wrong side of America's food debacle -

"Before coming to the White House we lived like a normal family. With two parents working we were too busy and trying to maintain some balance. Picking up kids from school, trying to get things done at work... I didn't have enough time to cook a meal for my kids, I was trying to make up for things in a way, so we went out for fast food a lot and ordered pizza. After a point I began to see the effects on my kids - our paediatrician said - you might want to start making some changes. So I did, short easy changes that led to this initiative "Lets Move".

Her goal is to provide more information for parents, to improve the quality of food in schools, to have less "food desert" areas of America which are nutritional wastelands; where the choices of what you eat are severely limited. And finally to encourage families to exercise more. Today she is hosting her first-ever live web chat on AOL Health. Her site at http://www.letsmove.gov/ has great videos and a soft, postive approach to the huge problem that America is facing with the health of its inhabitants. If the graph continues on its present trajectory, those who are children today in America will be the first generation to die younger than their parents. America is at an advanced stage of what is already happening in Europe, it will be interesting to see what a mother, albeit in the White House, can achieve against the might of the multinationals she's up against. I'm following you closely Michelle x
Posted by suzanne at 5:38 AM