So impressed with this cider, big shout out to David 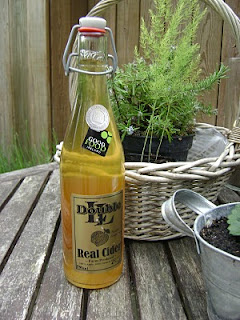 I love cider but find most of what's on the market so sweet it's like drinking flat 7-up. Not that there isn't a place for flat 7-up; if you're seven years old, or severely hung over.


In hot weather (let's hope it's not over) it's one of those drinks I really tend to fancy - perfect beer garden stuff, only to after one mouthful experience the inevitable "Bejaysus this is horrible" and ditch it after half a glass.

So I'm delighted to discover a decent Irish cider - happened upon by accident in the crafts beer tent at Bloom - which is a great addition - after all why not feature the small producers instead of the usual multinationals' sad warm pints of colourless stuff. Double L is made by David Llewellyn in Lusk - it's a great story; he started out working for another apple grower but began growing apples for himself and now has a range of juices, cider vinegar and even Irish wine. And he's only been in the business nine years.

He has so much demand for his produce that he buys in other apples from around the country. The Double L cider we picked up from him is really fabulous; it has that cloudy colouring and slightly tart taste that is so resonant of the rural ciders in Northern France which people make in their own back gardens and pass around to each other in milk bottles with cloth stuffed in the top. It also has none of that horrible sweetness of most commercial ciders, and it's fermented without the sugars, water and artificial colourings and flavours typical in mass produced cider.

He's a really nice fella as well and I really wish him the best with this. He told us his juices and vinegars are available in Superquinn and the cider is available in Stonybatter and at his farm in Lusk. Other new food hits for me at Bloom were Coolea cheese from Cork and Bad Boy Sauces from the fabulous Caribbean ladies, they are a taste knockout. Bring on the summer weather, and more cider x
Posted by suzanne at 2:05 PM