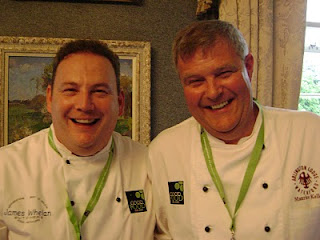 Racing is a game of two halves in Ireland - you're either in a corporate box being fed caviar from a silver platter or down in the enclosure trying to manage a steak sandwich that tries to slither away from you and gallop up the track. It's a sad fact that racecourses are not known for their spectacular food. As Philip says, racing is about backing horses, pints of Guinness and a Crunchie on the way out the back gates from the women with the prams of chocolate.

So I'm happy to report a very clever tie in between two things we manage to produce really well in Ireland - racehorses and food. It's something that should have been done years ago, particularly as racing draws many people who are not just there for the horses, but want other experiences and diversions at the racecourse throughout the day. With this in mind, it's great to see that this year's Irish Derby will have a food village from Good Food Ireland with artisan foods produced by their members available at the racecourse on Derby weekend - June 25th to 27th. It'll provide some real quality, Irish sourced food to ordinary punters at the racecourse and allow some food browsing in the down time between races. Last night the event was launched at the K Club with a selection of the food producers doing their thing, who will also be serving food at the Curragh.

Wowsers, the food was incredible. As press launches go, this is the kind of one you actually want to be at - surf and turf from Millstreet Venison, mini burgers with sweet caramelized onions from Country Choice, Sandra Higgin's delicious roasted free range chicken from down the road in Carbury, Cooleeney's goats cheese, Rossmore farmhouse icecream which had a real creaminess and sultle flavour and Tom O'Connell's sherry trifle in a glass pot which looked and tasted beautiful. There were more food producers there then I could get round to tasting, the full selection is on Good Food Ireland's website. Margaret Jeffares did a fabulous job putting the event together and I hope the Good Food Ireland village will become a fixture at the Derby, or even other Curragh meetings as it can only make the festival even better. Well done to all and looking forward to some good racing, and eating.

More photos of the night available on my facebook page
Posted by suzanne at 8:19 AM