Feeling unwell? Have some chicken soup - Jewish medicinal cooking at its best 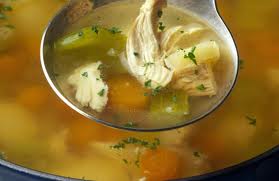 The runny nose, the headaches, the shivers, the huge bill for useless products at the pharmacy... Manflu - we all get it from time to time. Despite not actually being a man I've suffered from three bouts of manflu this year and I've found many people reporting the same. Colds, coughs and flus seem to be increasing in number and severity.

What's the reason? It could be many things - an increase in warm, damp weather or higher levels of virus mutation and activity. What's not helping is the rise in antibiotic resistance of many bacterial infections.

There are moves in the EU to reduce antibiotics fed to animals which can only help the problem of bacterial infections and viruses in public health. What was thought to be good farming practice is increasingly viewed as something that has created giant health problems - generations of factory farmed animals have had antibiotics routinely included in their diets. This promotes organisms in their systems to become resistant to antibiotic treatment. And once those organisms spread from the animal population into the human population they can do real damage, such as the prevalence of MRSA in hospitals.

MRSA has been found on packaged meat in Europe. Other antibiotic resistant organisms that are now present in human health have been found to have originated in poultry populations in Holland and in pig farming in the US.

The FDA in the United States which is one of the world's slowest moving food bodies, is finally also examining antibiotics in the food chain. Farm and food groups are lobbying the FDA for change. It's greatly needed and consumer pressure can have huge influence so don't underestimate the power you hold in helping your own future health.

In terms of the common cold there are over 200 viruses around us that are actively causing colds and flus at the moment. And if you're anywhere near small children, you'll get all 200 of them, in the one year. Or so it seems in our house.

When I examined foods that might help stave away colds, I found good evidence of some that actually do work. Others, like vitamin C, have a reputation for curing or preventing colds that simply doesn't stand up. Particularly if you're spending money on vitamin C supplements, think again - the research sadly proves that it doesn't do much good for colds.

In Shelf Life in today's Irish Times I give a run down of the best food bets for beating colds and give ideas for rustling up some traditional chicken soup. It really does work, the ancient Greeks and Jewish medicinal cooks were on the money! Check it out and take hope - feeding yourself properly will boost your immune system and it's pretty easy to do. Nothing complicated, just simple sense x