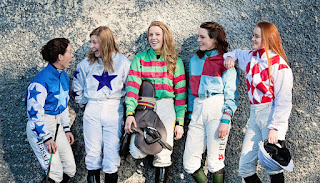 This time of year I'm particularly vulnerable to damaging, self destructive behaviour as today sees the start of the Cheltenham festival, which to horse folk is sort of like Christmas.

Besides good food, horses are one of my more ridiculous, hard to kick habits. After a few years on the sidelines with small children I've jumped back in head first, and with Cheltenham starting tomorrow, it feels like party time, particularly as I'll be 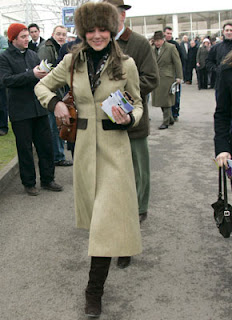 flying to the Caymans with my winnings by Friday. For those of you who ask "What the what is Cheltenham?" - it's an English race meeting in Gloucester where the best of national hunt horses (horses that run over fences and hurdles) in England, Ireland and France compete for the largest and final accolades of the season.

If you've been to Cheltenham you'll know it's an insane mix of Royalty, travellers, trilbys and high emotions. In 2007 I stood in the winners enclosure beside Princess Anne in a mass of bodies and high decibel cheering as Micheal O'Leary draped a tri-colour over a sweaty and steaming War of Attrition who had just won the Gold Cup. Later that day, Kate Middleton (then the world's best known civilian) tapped my husband on the shoulder with her race card in the weigh room and asked him for tips. He took one look at her mink hat and said "I'd imagine you've
better information then me love" and walked off, not knowing who she was until she appeared on the front of The Telegraph the next day. It's that kind of place.
You laugh, you cry (seriously) you feel knackered as hell after four days there but it's a life experience everyone Irish or who loves horses needs to experience at some point.

Last Sunday night I won four tickets to Cheltenham at a pre-racing event and gave them to a friend to go as he'd never been. I think the karma is coming back in a strange way as I just found out the horse I'm riding at the moment was 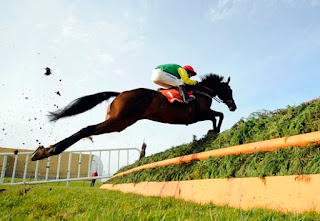 3rd to Sizing Europe (pictured right) and Big Zeb who are two of the favourites at this year's festival. Let's just say after 30 odd years riding I finally know the definition of "travelling". So goodwill brings its own rewards (are you listening Paddy Power?)

I did a piece on Saturday on our Irish lady riders competing at the festival if you want to check it out below. They are all fabulous women (pictured in the group shot above) and hard as nails. Both Katie Walsh and Katie Harrington were also accomplished event riders before riding in bumpers and then over fences. Lovely to see the girls competing on an equal footing in the sport and best of luck to all the Irish runners and riders this week. If you feel like a flutter, scan the papers and put on a few quid in the local bookies. The twitter feed for the meeting with all gossip and reaction is at #cheltenham and my highs and lows (will try to control the emotions) evident @campbellsuz

The Irish Times
10th March 2012
Suzanne Campbell
Never before has there been so much competition in the weighroom, only this time it’s female. Irish lady jockeys are increasingly taking home the silverware in National Hunt Racing, with two of our best known - Nina Carberry and Katie Walsh competing for wins at the Cheltenham festival next week. These two riders have altered the perception of women in the sport from being “female riders” to simply top jockeys in their own right. Last year Nina Carberry won the Irish Grand National becoming only the second woman rider to win the race. Katie Walsh, sister of jockey Ruby Walsh and daughter of the commentator Ted has also proved a leading rider over fences. She finished the 2011 Cheltenham festival with two winners, one of them fought out against the mount of Nina Carberry who is also Katie’s sister in law. These two riders, alongside Kate Harrington, Liz Lalor and Jane Mangan have been chosen by racing journalists as the Ladbrokes Grand National “Leading Ladies of Racing”. Kate Harrington is an accomplished three day event rider, and like Liz Lalor and Jane Mangan, has also had wins on the track. Expect more top prizes going into the hands of these jockeys, and some tight Cheltenham finishes fought out by our leading lady riders.
Posted by suzanne at 3:54 PM