If you're one of the 700,000 Irish people buying a turkey in the next few weeks you might want to read this... 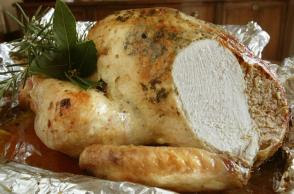 Many of us would like to buy an Irish turkey this Christmas and ordering one from your nearest butchers seems a great way to keep money in the local community. But a surprising quarter of the 700,000 turkeys we'll eat this Christmas are likely to be imports from Italy and France with many being sold as Irish birds by local retailers and butchers.

Under current law it's not mandatory to label imported turkey as Italian or French so we may think we're buying a locally reared turkey. Unlike most Irish-grown turkeys sold this Christmas, birds from Italy and France are farmed more cheaply but are routinely sold at around the same price as Irish turkey.

As they are shipped here they are less fresh and could be more likely to cause food-borne illness. So how can you ensure you're getting a fair deal and a Christmas turkey that's healthy, succulent and a meal to remember?

Turkeys from butchers and small retailers

Ask your butcher if the turkey is Irish. Under current labelling law, retailers are not required to show country of origin on the turkey itself but if asked they must tell you where the bird was slaughtered and indicate if it's an import.

"We encourage our members to sell as much Irish product as possible, but it's not for us to tell butchers what to do," says Dave Lang of the Association of Craft Butchers.

"There are imported Christmas turkeys for sale, but I don't think there's subterfuge going on. "Many butchers and small retailers will stock Irish birds but you should ask rather than assume. "If you see a Quality Assured mark on a turkey in an Irish retailer, you know it was grown in Ireland to high production standards," says David Owens from Bord Bia. "However, last year we saw over 160,000 imported turkeys coming into the country and consumers should be aware of that. These turkeys should be cooked immediately and not frozen."

Most Christmas turkeys sold in supermarkets are Irish birds grown by the three large turkey producers in the country. These are white turkeys which mature in about 16 weeks and are reared in large indoor housing without access to the outdoors.

Many of these supermarket turkeys will have a Bord Bia Quality Assured mark which means the farms are inspected for welfare standards, stocking density and the type of feed and medication the turkeys are given.

If you want to your turkey to have had a longer life and increase the chances of a tasty tender bird, buying a free-range bronze turkey is increasingly popular. Bronze turkeys are the old-fashioned black coloured bird once common on Irish farms.

As they are slower to grow they should taste more tender than a commercial turkey. The meat is also said to have more flavour as the turkeys forage in grass and have a more varied diet. "There is no such thing as a dry bronze turkey," says Ronan Byrne who is rearing 600 free-range turkeys at his farm in Athenry.

"My birds take almost six months to grow and that's why I compare them to Aberdeen Angus beef. They're tender, juicy and have lots of flavour."

If a turkey is labelled 'free- range' it means the turkeys were allowed access to an outdoor area and the farms are inspected to comply with free-range regulations. Because of increasing demand many supermarkets, large retailers and farmers' markets now sell free-range, which may be white or bronze birds.They are more expensive than commercially farmed turkey but Mr Byrne says there's always a certain amount of customers that want quality. "Once people make the change they come back to me year after year."

Organic turkey is the most expensive of all the options as the turkeys are fed a diet of grains and grasses which have been grown without pesticides. They must also have access to grass and be free-range.

Taste-wise, organic will be very similar to a bronze free- range turkey but more expensive as organic feed drives price significantly upwards. If you choose to buy a premium product such as an organic turkey, check that the packaging or that the producer has an IOFGA (Irish Organic Farmers and Growers Association) or Soil Association stamp.

Buying from a local farm is often a cheap way to get a good turkey as it cuts out the middleman.Many farms now sell direct from farm gate and some deliver turkeys to your door. If you want to be sure a turkey is free-range, buy it from a farmer you know or visit the farm. Many farmers encourage customers to see their farms and to collect turkeys once they are ready.

It also makes a lovely outing for children around Christmas time. If you're short on time, many farms now sell online.