Like prostitution, food substitution is one of the oldest trades in the book. "We're being codded" Part II 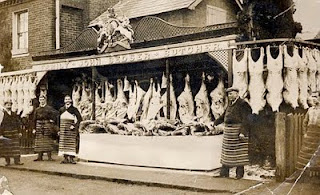 Food substitution or food swindling in order to make money is one of the oldest tricks in the book. While may think what we eat today is dominated by food additives and unnatural manufacturing, our range of foods has to be better than a century ago when particularly urban people were at the complete mercy of food sellers.

Freidrich Engels even wrote about it - pointing out that as working men got their wages on a Saturday in industrial Britain they had to buy their family food on Saturday evening. This was the beginning of what we know today as evening grocery shopping. And as much of it was conducted in candlelight, this was where a lot of the chicanery took place. As the good food was sold off from the morning onwards, the ordinary working person was left with the poor produce that remained by the evening or produce that was discounted precisely because it was foul. Rotten meat was covered with a layer of healthy fat, aged butter was covered with a coating of fresh butter, oranges were boiled to make them weighty and shiny and in the case of fish, their gills were painted red to make them look fresh.

Sadly there are still plenty of people out there willing to pull the wool over our eyes. In 2009 the Food Safety Authority brought two Irish companies to court for the mislabelling of fish. They won their case against one of the companies who was passing off farmed salmon as wild salmon; an altogether rarer and far more expensive product. One of these companies is a very well known fish retailer and wholesaler who got off on a technicality but was nonetheless happy to pass off farmed salmon as wild salmon and collect the huge difference in price for quite some time.


So like prostitution, food substitution - as one of the oldest trades in the book is still very much alive and well. But who's going to take on the villians of the piece? Following this most recent survey on fish mislabelling and recognising the scale of the problem, the FSAI are introducing annual checks for fish and food businesses that fail to keep appropriate traceability records or who are found to be intentionally misleading consumers. They also say they will take repeat offenders to court but for the moment most of them will get off with a verbal warning. Unfortunately that is how the legislation stands. Seems a bit lily-livered to me. 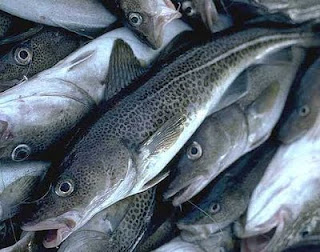 One of the sad facts behind the mislabelling story is that most of the fish that is being passed off as cod is imported. Not only that but much of the white fish we eat is imported. White fish, behind farmed salmon, is the second most popular seafood in this country and the similarities between filleted white fish make substituting species easy to do. Most people don’t know the difference.

In terms of our own lovely local seafood catch, 80% of Irish fish is exported to Europe where there is a ready market in France and Spain for high quality, fresh whole fish. Unfortunately we Irish consumers don't seem to be switched on to how good the product is on our own doorstep and instead eat cheap imports that come from Iceland, the Faroe Islands, and Scandanavia which have been ususally frozen for several days. This imported fish is cheaper, and comes in huge volumes so this makes it more attractive for supermarkets in particular. It also comes filleted, ready for sale and Irish fish just can’t compete.

So, what do we do about cod?

In the FSAI report, fake Cod is the fish that keeps cropping up again and again. In fact nearly three quarters of the "smoked cod" on offer to Irish consumers that the agency tested wasn't cod at all but Pollack, Coley, Saithe or God knows what else. But there's two interesting things that emanate from this - one is that even though stocks are shrinking, Irish shoppers still want to eat cod, whether it's bought in a supermarket or a chipper. So the mislabelling of cod perpetuates the myth that there is plenty of cod about. This means that Irish consumers are failing to adjust our shopping habits and our wallets, to food that is endangered or comes with a high environmental cost.

So what can consumers do to eat more Irish fish and avoid eating something that is falsely labelled? Firstly if they buy their fish locally it’s the easiest possible option. 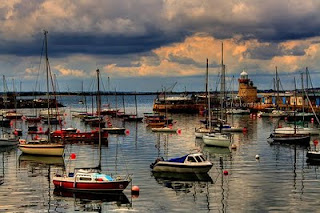 In Dublin you can still buy fish direct off boats coming into Howth, harbour, (pictured) Dun Laoghaire and Dalkey and there are fish dealers in this area who will get you what you want straight from the boat. Local fish mongers, though scarce, are a great option and if it comes to supermarkets, buying Marine Stewardship Council certified fish gives you a certainty that it’s sustainable and has a country of origin label.


A new scheme soon to be brought in by Supervalue will see Irish fish being retailed on their shelves which is traceable straight back to the boat it came in on which is really great.

Ironically, one positive thing coming from this fish mislabelling affair is that it reveals we are patently happy to eat lots of other fish besides cod, and in fact we didn’t seem to notice the difference. But if most of us are happy to eat cheaper fish, the savings from doing so should be made by us, not by someone trying to pull the wool over our eyes.

If you're interested in fish stocks and their sustainability check out Ocean 2012 which is a coalition of groups lobbying for change and sustainable practices in the EU's Common Fisheries Policy. They're at http://www.ocean2012.eu/ and the Irish representation is on twitter at @OCEAN2012IE - they will soon have news coming up on Irish events for European Fish Week June 4th - 12th.
Posted by suzanne at 3:17 PM