Behind the scenes at a five star - the g in Galway 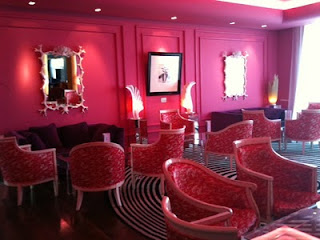 It's funny that despite how messed up Ireland is at the moment, our food culture is punching way above its weight in a worldwide context. Among farmers, artisan producers, restaurants and hoteliers there is a strong awareness that not only is Irish food worth 8 billion in exports yearly but it is the one area bucking the recessionary trend.

I keep thinking that with the continuing drive of passionate chefs, producers and the food agencies, there is no reason why we can't make Ireland a food destination like Piedmont in Italy, where people visit here for not just hospitality and landscape but for food.

Last week I attended a food event in the g Hotel in Galway which illustrated this connection perfectly. The g is a five star hotel, but ten years ago in Ireland, five star hotels created bland menus that "ticked all boxes", with Italian food, trophy steaks, Caesar salads and mid-Atlantic staples that resembled a watery mix between Sheraton, Radisson and Celine Dion playing in the lobby. Sometimes a throwaway Irish dish to might make it onto the menu but far more important was the approach of trying to please too many people with descriptions and presentation of food while little thought was paid to where it came from.


Last week's event in the g proved that happily, things have come a long way. Their "g is for Gourmet" dinner mirrored their overall policy in sourcing as much food as possible from local producers - the lamb was from local farms, scallops and prawns from Gannets in Galway, salmon and beautiful smoked tuna from Graham and Saoirse Roberts' Connemara Smokehouse and cheese from Keane's Bluebell Falls herd of goats.


Executive chef Stefan Matz who heads up both the g and Ashford Castle made the point that it's no longer enough to talk about local food - "you have to practise what you preach and go and put it on the menu". 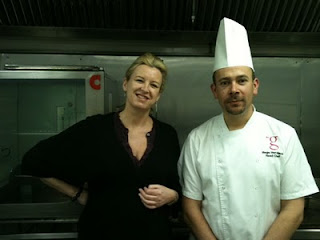 From the producers standpoint it's a win win situation - they see their food on top menus in Ireland which in turn sell it to an overseas audience. It is also wonderful to see a product like Bluebell Falls cheese transformed into three separate desserts; with three very different complex tastes - very technical cooking was in evidence but with a basic local foodstuff - it was a real eyeopener in what you can do with good simple quality produce.

The following day the g Hotel opened up their kitchens for a workshop with their chefs. Head chef Regis Heriaux took us through the cooking of a leg of lamb - opening up the leg to look at the four different types of meat within and what cooking suited them best. He pointed out how muscle closest to an animal's joint works the hardest and needs slow cooking, other parts of the leg had a lighter treatment. All were served up with turned local potatoes - he even showed us the correct technique for turning; leaving seven clearly visible sides on the vegetable.

I was fascinated by his tips from his years spent in top kitchens - "Buy good knives and use a diamond sharpener - I have the same knives for 24 years as a result, and don't let anyone else use them".

- "Touch produce that you want to eat, that's why supermarket's package everything - they don't want you to shop with your hands or sense of smell but with your eyes, which is not a way to learn which foods are fresh", and


- "Don't buy meat that is pinky red, it should be a darker purple red to show proper hanging time and give flavour". 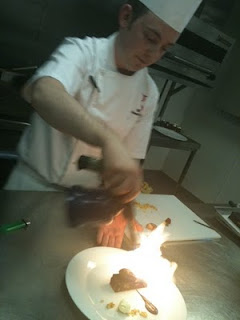 Regis was entertaining, a great communicator and I expect to see him on television any day soon - any chef that says don't hold back on the butter is always pretty popular with an audience n'est pas? Being from Brittany he pointed out that olive oil is not synonymous with French cooking but with cooking of the South of France, in his neck of the woods it's pretty much butter all the way.


Shane Smith the pastry chef then took us through a basic Chocolate Ganache and a brownie base on which you can build any type of sweet item you fancy, he also threw some flames about and made a honeycomb from caramelised sugar, honey and liquid glucose, illustrating how it expands into a beast of a dish once the bread soda is added - literally spreading in size like "The Blob".


This was fascinating to watch as he made what looks very complicated, accessible in several easy parts. We were all given recipe sheets and explanations of the dishes and I would really recommend that if they offer more cookery courses at the g, foodie fans should definitely check them out. 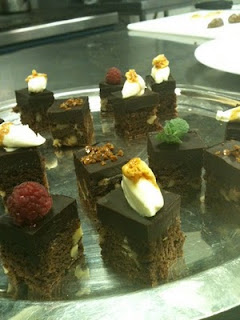 It struck me that both the level of expertise, the recipes and experience they were communicating is a notch above what we're now accustomed to from wall to wall cookery programmes. I consider myself a half decent cook but rarely learn anything new so this was definitely a notch above the normal standard. I came away wanting to learn more and put what I'd just seen into practise.


I also left the g with a strong sense that Irish five stars are seeing what potential there is using local food as a USP. Customers aren't stupid, especially at this level they want an authentic experience not a bad Caprese salad with ingredients from six hundred miles away. They want food to tell a story and be regional, to have real people at the heart of it. Just like the producers who attended the event and provided the basics of what was on your plate, they want to sense a passion behind the dish, and to feel that it is "real food".
A big thanks to everyone at the g, I must credit their staff - they had great knowledge of the food and drink, the producers and the local area which is something lacking in many Irish hotels and restaurants. I cannot count the times I have asked "is the chicken/fish local?" and been told "I don't know." Customers want transparency, information, and enthusiasm. The staff in Galway had this in bounds and it felt like everyone was on the same page food-wise and in the way they wanted to present their hotel, their food and their region. Exactly as it should be.
Posted by suzanne at 12:48 PM