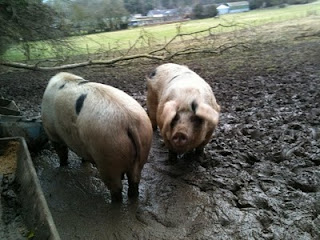 While these two girls - Pinky and Perky enjoy rooting in the Kildare mud, their beautifully flavoured offspring are in our freezer, awaiting distribution to various buyers and to the most important destination of all - the oven in my kitchen.


Yesterday I paid a visit to them down on the farm. For the record they are neither pinky or perky being close to 40 stone each in weight. Yes, forty. They are the size of small sofa and produce about 12 piglets per litter.

The sows belong to John de Robeck, a conventional farmer who got into free range Gloucester Old Spots several years ago. From these two females of his original stock, John's brood produced huge numbers of offspring. At one time he had as many as 180 pigs but found that even with these economies of scale, free range pork is a tough business to sustain.


Alongside commercial pig producers, the cost of feed has put real pressure on Irish pig farmers, even those like John who operate on a smaller scale. Keeping free range pigs is also particularly labour intensive and finding customers willing to pay a higher price for "artisan" pork is never easy. So John scaled down and now produces only a couple of litters a year, selling them direct from his farm. 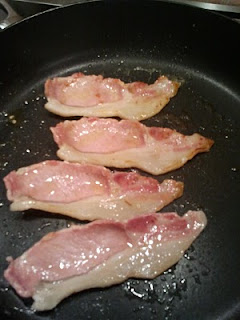 For those who buy John's pork the disadvantages of a high cost system are outweighed by the mega flavour of the product. Once you've sampled his bacon it's very hard to eat anything else. It has a deep succulent quality; you can almost taste the woods and orchards where the pigs forage and most importantly, it's devoid of water and nitrates as it's "dry cured". So when you cook this bacon, you're not left with a nasty pan full of water.

So while you might pay 10 - 20% more for an artisan pork product, it doesn't contain water to bulk it out. So pound for pound, let alone flavour, it's a pretty good deal.

John weans the piglets much later than a commercial pig producer would and kills them at nine months. Commercial pork is killed at about six months old. Allowing the animals a bit more growing time is crucial to why free range pigs taste better - under six months of age or so pigs have little fat on their body, and fat is what flavours most meats - it permeates through the grain of the muscle when cooked, softening it and giving it a wonderfully rich flavour.

Bord Bia Quality Assured pork from big producers is still pretty good pork, and if you want to buy a cheaper product that is Irish, and properly farmed this is the direction to go. The standards demanded under this system are high and it guarantees what's on your plate is Irish produced and processed at every step from the sow to fork. But if you've a passion for a good tasting product or keeping old animal breeds as part of the food chain, there should be a place for both types of systems. Even buying free range pork occasionally is a way of keeping the small guys producing an alternative. 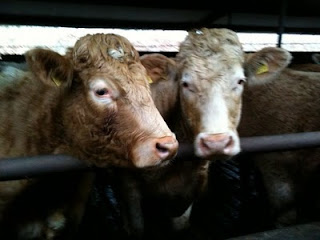 John also has a beautiful collection of store cattle housed at the moment; mostly continental crosses - Charolais, Simmental and some Belgian Blues. I'm obviously a strange fish as I love looking at good cattle for that unique combination of top quality confirmation, pretty looks and visualising how great they'll taste on my plate. And if you're feeling guilty about scrutinising the largeness of their hind end, just ruffle their polls and they'll look at you all gooey-eyed and content.


It's lovely to spend a day with a someone doing different systems on the one farm - conventional beef farming plus free-range pork. Like most Irish farmers John wants to produce top quality food, and despite the huge man hours and patience that go into keeping free range pigs and selling the produce yourself, he has too much of a passion for what he does to give them up. He's also a bit of a softy when it comes to animal welfare; liking his pigs to be out and living as natural a piggy life as possible.

I came back from a happy day in Kildare laden with 200 euro worth of pork; sausages, rashers, loin, ribs and hams booked for a number of enthusiastic buyers who raved about his last batch. If you want to try John's produce you can contact him on jderobeck@eircom.net. The rashers alone are out of this world. If I don't stop eating them I'm heading straight for a cricket score cholesterol count. Sod it, what about those sausages...
Posted by suzanne at 2:55 PM