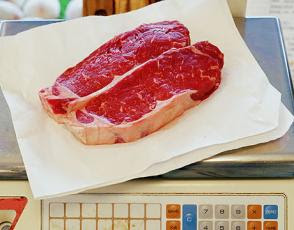 A new take on meat - my piece in today's Irish Independent

With celebrities from Paul McCartney to Star Wars actress Natalie Portman telling us to eat less meat, switching our shopping habits towards a vegetarian diet is one of the pieces of advice dominating the food world right now.

The rise in obesity levels combined with the unsustainable nature of beef production means that consumers are now encouraged to limit the quantity of meat they eat and turn instead to buying more vegetables, fish and meat alternatives.

But a new book by Irish butcher Pat Whelan argues that going back to the old-fashioned staples of our traditional diet; eating plenty of beef, pork and lamb is not only a healthy choice but one essential to our wellbeing. Whelan, who is the fifth generation of his family to be involved in meat production, runs a butcher shop in Clonmel, Co Tipperary and his knowledge of meat from farm to fork has earned him a Rick Stein Food Hero award.

In his book "An Irish Butcher Shop", Whelan argues that one of the reasons consumers find it easy to turn away from meat is a lack of knowledge on how to prepare it and an over reliance on inferior quality meat sold in plastic packaging in supermarkets.
He points out that beef should not be sitting in a pool of its own blood in a plastic box, and that everything about the mass production of meat and the way it's marketed to consumers is contrary to the core benefits and joys of eating it.

He argues that instead of turning away from meat, we should be appreciating its unique benefits -- red meat is the single most intense nutrient-rich food available to human beings. It's a crucial source of iron and trace elements such as zinc and copper, as well as vitamins B12 and B6.
Fat on meat is also something we shouldn't be afraid of -- it is fundamental to the taste and tenderness of the finished product.

Irish beef that is fed on pasture develops a good covering of fat which gives it great flavour. Because it's grass-fed, this makes the meat a high quality, close to organic product. Meat from grass-fed animals has up to four times more omega-3 fatty acids than meat from grain fed animals. It is also the richest known source of CLA or "conjugated linoleic acid"; an exceptional omega-6 fat which has been attributed with antioxidant and anti-cancer properties.
Most of the current opposition to beef consumption is related to cattle "feed lots" -- vast industrial-scale feeding units found typically in the US but now growing in popularity in India and China. Here animals live on a regime rich in maize and cereals which is not their natural diet.
As the appetite for beef grows across the world, we have to produce more cereals (wheat, barley and so on) to make the animal feed that cattle eat.

In many developing countries, feeding cattle (or chicken and pork in large quantities) takes other foods and water resources out of the food chain. Put simply, if everyone across the world adapted to the 'Western Diet', we'd run out of many foodstuffs, and water.

Farm animals also produce more than 10% of the world's greenhouse gas emissions but new approaches to the anti-meat argument such as Simon Fairlie's book -- Meat: A Benign Extravagance has swayed even the hardened environmentalists such as best-selling author George Monbiot back towards eating meat. Fairlie argues that it's specifically feed-lot production of cattle that reduces the world's food supply and that what we should be doing is eating meat but simply less of it.

In Ireland the situation is very different; cattle and sheep roam outdoors and eat grass which is in plentiful supply, so the beef and lamb we eat takes a minimum of inputs and is fairly sustainable.

However, most pigs and poultry in Ireland are farmed in intensive indoor units where the quality of the animals' lives is poor and again they are eating a cereal based diet.
Ireland comes closest to factory farming in these pig and chicken "units"; vast indoor sheds packed densely with animals.

The intensive production of chicken and pork over decades has also affected what we're getting on our plate -- pigs are slaughtered at about seven months old, and unfortunately quality and flavour of modern pork has been affected by the breeding of faster maturing pigs. So the consumer pays the price with an inferior-tasting product.

The bacon and rashers most of us eat have been injected with brine, and can often contain more water than meat content. So while we think mass-produced cheap rashers are good value, if they end up a third of their original size after cooking then it's a bad deal.

You might get better value from an artisan-produced pork that's more expensive raw but yields more meat when cooked. One way to keep both sides happy is to continue to eat meat but put more thought into what we buy.

Pat's book is full of recipes for everything from 'pot-roasted shoulder of lamb' to 'boozy rabbit with prunes'.

His advice is to vary what you buy from the old staples of sirloin, fillet, lamb cutlets, pork chops and rashers. Try new cuts and free-range or artisan products occasionally. The pay-off is in quality, taste and ultimately better value for money.