A "back to front" dinner party, and why I'm giving up cooking 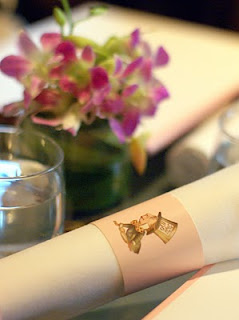 When you're surrounded by house-moving boxes and flailing through bubblewrap for wine glasses is one job too many, it was a blessed relief to have a dinner invitation this weekend and escape the mess. The worst part is agonising over what to throw out - today I finally let P ditch my t-shirt from Notting Hill Carnival 1991. Sacrilege, yes. Piece of shit garment that I was never going to wear again, yes.

So when someone tells you its dinner time at their place, the prospect of having a break from saying things like "can you Oxfam sunscreen?" to eat someone else's fantastic food is pure bliss. And to make things even better, the occasion was no ordinary meal, but a gastronomic adventure in time travel - bear with me on this.

The hostess - Francesca Walsh, not only entertains on a grand scale but puts the type of expertise and effort into technical, high end cooking that leaves most of us far behind and still hunting around for a tin of tuna.

With twelve dining, Francesca's candlelit summerhouse was the venue for her "back to front dinner party" - where all the dishes had the appearance of something from the opposite end of the meal. Complicated yes, and the type of thing best left to Heston Blumenthal. But novelty cooking has a fun factor and offers a welcome change to over-safe restaurant menus which constantly list the same ten or so dishes. It's got to the point where "beer battered cod with pea puree" sends me into a coma.

Francesca's starter was Cashel Blue cheesecake with tomato ice cream. Yes, this was a starter. To be fair, she admits this wasn't the most successful of the dishes - her comment was "Vile. Do NOT try this at home" but she's exaggerating. Blue cheese in a cheesecake is a genius idea, this one just had slightly too much of it, likewise the tomato ice cream.

Main Course was served in the form of an afternoon tea. A baked prawn mousse in the shape of a muffin not only looked the part but tasted sublime. This was accompanied by a small triangular sandwich of flat bread enclosing fresh green beans with a baked pollock fillet. A crisp round of short-cut pastry was dressed as a drop scone and topped with lump fish caviar (the jam).

And there's more. To accompany this course she served a cup of tea - a saffron and mushroom broth served in delicate china cups, this was so delicious I had seconds. By this stage I was making a mental note never to cook for Francesca again.

Dessert was soup (Back to Front dinner party ..... remember?) - The chilled raspberry and black cherry soup was accompanied by breakfast lavender cream served in egg shells. The eggs were placed in delicate silver egg cups and dressed with`toasted soldiers' of Madelaine's which sat within the lavender cream placed in the eggshells. The raspberry and black cherry soup was fantastic - really sweet flavours but with a richness and depth that suited being served as a soup.

This was following with Petits Fours - black chocolate truffles with popping candy inside. It was a deliciously smooth end to a fun meal. At this point, I felt I needed a small lie down a la Christmas dinner but my plans were interrupted by a loud rhythmical thumping in the next room. Guests paused, Petit Fours half-way to our mouths while we encouraged our lovely hostess to ignore the noise. Good job she didn't - Lily the cat was rotating steadily in the tumble dryer - having her own version of Funderland without having paid for the pleasure.

As you can imagine, full on drama ensued but Lily was retrieved and apart from a little dazed seemed in good spirits. It's just as well dinner parties like this don't happen on a regular basis. For one, how could I serve my Oliver Twist type offerings knowing that such delights exist on other people's tables, and secondly, how can you top "cat survives tumble dryer" as your evenings entertainment. So I'm throwing in the towel, just as well our dinnerware is in packing boxes, it won't be leaving there anytime soon.
Posted by suzanne at 2:14 PM