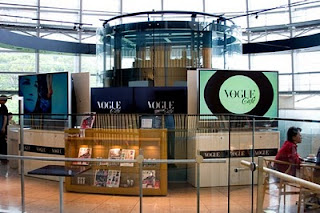 I thought themed restaurants died off in the '90s. Apparently not. According to the Wall Street Journal, Condé Nast is looking to expand its magazine-themed restaurant business across the globe.

Apparently Moscow already has a Vogue Café, and a GQ Bar. If that's not bizarre enough they also have a Tatler Club. What next? Condé Nast Traveller cocktail bars with Malaysian palm beach decor and plinky plink music? Maybe not - I spent some of my dissolute youth on a Malaysian paradise island which had banned alcohol, a fact which rather inconvenienced Philip and myself.

It's testament to the power of Condé Nast's brands more than anything that they can expand willy nilly into what have been diffcult waters for other groups, remember the Fashion Cafe anyone? The company is apparently trying to build its brands beyond print magazines, which have been suffering from drops in advertising.

Is it the case that outside Europe and American the lure of Western brands will still bring people to a food outlet? Have we moved on here or have we just re-trained our brand sensitivites to Marco Pierre-White and Frankie Dettori, - both of whom have branches in Dublin. We may pride ourselves on being more sophisticated than to eat in a Hard Rock or Vogue Café, but we do exactly what everyone else does in the world by eating branded food restaurants that we somehow percieve as being of gauranteed quality. In my experience branded outlets usually mean very much the opposite. Yes of course we're more sophisticated than people in Moscow. Starbucks anyone?
Posted by suzanne at 7:01 AM