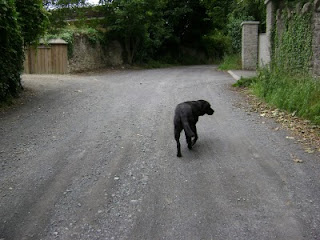 Peregrine falcons are bad bastards. This morning one of them dive bombed a wood pidgeon who was calmly pottering in the field outside our house and in a matter of seconds made mincemeat of him. Then he sat on top of the poor bird and tore him apart. While brutal, it was fascinating to watch.

The rain was pelting down, even the neighbours horses had squeezed into the field shelter (all five of them, which is usually interesting) but the peregrine ignored the driving rain and the horses and chewed up chunks of pidgeon for a good half hour.

Myself and the baby watched from the bedroom window but the baby wasn't very impressed. She likes her mammals large and her birds small, so that she can point at the bird feeders hung outside the kitchen windows and bellow "Tit!". Or rather "Dhat!". I found the whole thing thrilling, even if my knowledge of birds is limited to finches of various colours and a strain of robin we seem to have at our place who are so violently territorial they make Quentin Tarantino characters look lame. [One morning I found one of the robins sitting on top of the dead body of his rival pecking out his eyes for a small snack.]

So, downstairs we headed, to look in the bird watching books and sure enough the bird outside the window was a peregrine, with his distinctive black cheeks. I was delighted, I felt like texting all of my friends instantly, then I remembered that they have real lives where they do not look out of the window at birds killing other birds for half an hour in the morning.

At the moment we are living in a rural area close to a large town. It's great; I can keep an eye on farming and food production and who's doing what in their fields, while we still have our going- out nights, our nipping down to the shop for Bad Snacks, and all the advantages of country life - peregrines in the garden, pheasants patrolling the hedgerows, the activities of the dairy farm nearby and of course, loads and loads of illegal dumping.

While I loved watching our neighbours cut their barley last week (I hope they get a decent price this year) what I don't love is the sky high piles of scary stuff appearing in the lanes. And if you're situated in anything that looks like a country lane that's close to a urban area you've had it. And it's not only the usual - carpets, household rubbish, mother in laws etc, early this year we had five deer carcasses dumped over successive months, some of them headless, in a lane close to our house.What I can't work out is why.

Around that same time I did a report for RTE Radio's Countrywide programme on deer stalking and for sure, poaching of deer is a thriving activity at the moment. But it's usually to sell the venison to some naughty game dealers are buying out of season. Some say that lamping of deer at night is taking place, again for venison or for cheap meat for dogs - lurchers and the like which are used to bring them down. Nice.

To dump the carcasses makes no financial sense as you have to transport them to the lane, and drag them into the hedge - presumably to hide them, which hasn't worked at all well if I can see the white arses of the deer sticking out of the hedge ten yards away.The neighbours and myself can't work it out. It could be a farmer who is culling them because they're eating his grass. And doesn't want the bodies left on his land. Whatever the case it's an ugly practise and presents obvious public health issues if they are not removed.

This is the thing with country life. While you think you're safe from mad urban stuff it doesn't mean that mad stuff, whether urban or rural, doesn't come knocking at the door. In a few weeks we are to move from this house, to a more rural area. It'll be a big change and we will miss the proximity to urban life that we have now. I really don't want to go as I love it here but one thing is certain, I don't want to go back to living in an urban area. My daily walks round the edges of the fields are truly, the nicest part of the day. If we moved back into a town the labrador would get fat, and the baby and I would have nothing to look out the window at. Mind you, there's always Dr. Phil on the telly...
Posted by suzanne at 8:55 AM