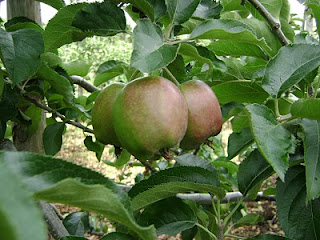 No wonder we can't find Irish fruit in our supermarkets; on Saturday's Countrywide we discussed how sadly many people have stopped farming Irish fruit over the past ten years, particularly apples. Not only are there few farmers left in the business, for those interested in starting up it's very costly to enter – to plant an acre costs about 10,000 euros. And not only are the start up costs prohibitive, you’ve a lot of expense on labour afterwards. And if you haven’t an existing market or relationship with supermarkets it’s hard to sell them. All of this points to why as consumers we have little choice but to buy foreign fruit in our supermarkets.


Generally the multiples are fairly unapolegic about all this, saying that for value they need to import apples from as far away as China and Chile and have a year round supply. But Irish apples can be available from September to April if they are stored and many varieties store well but it's more about what the consumer wants and if they stop looking for Irish fruit there’s no need for the supermarket to stock Irish fruit. So we can only blame ourselves for not looking for Irish produce, if there's no demand for it supermarkets won't stock it, it's as simple as that.

Despite this there are still a few growers around the country who are keeping the tradition of apple growing in Ireland and saving the breeds that were once plentiful in this country. In Tipperary Con Traas runs a great example of a thriving apple and soft fruit business despite difficult times in food retail.

He has 30 acres in apples about 20 of that is commercial breeds which he makes into juices and sells the apples, but he also has about 10 acres in Irish rare breeds. His parents were fruit growers in Holland and they came to Ireland in the 1960s as land was short in Holland, buying the land he still farms on. When they first came to Cahir they grew everything from tulips to cabbages. Apples were also something they produced and in addition to keeping on that tradition, Con has a large amount of soft fruit in the summer time; mostly strawberries and raspberries, but coming into September, now is the height of apple season on the farm.


Con also has old Irish Breeds of apples but we don’t these commercially for sale. It’s a real pity, we have some great old Irish apples with wonderful names like Buttermilk Russet, Cavan Newington and Ballinore Pippin but the fact of the matter is that in today’s mass market, Irish apples just don’t cut the mustard so to speak. You might have a great variety but it blemishes easily, or you have a lovely tasting apple which falls off the tree too early and you can’t sell them all at the one time, so in terms of commercial apple growing they have missed the boat, but in terms of growing them at home or saving Irish varieties it’s a great thing to have in your garden and also important to keep that genetic heritage alive. Con still thinks it’s important to grow these apples and he juices them and sells them direct in his farm shop.


It's great to see an example of a farm shop working really well. Certainly on the apples he is very competitive on price, somewhere around half the price of the supermarkets. On the soft fruit his prices are around the same or a little bit lower than the supermarkets - obviously the supermarkets can offer special offers but he has the freshest of produce that’s picked at the last minute. So in terms of ripeness, taste and quality Irish fruit rather than imports definitely wins out.

Fruit growing is one of the areas in Ireland where farmers have real problems dealing with the supermarkets. I was talking recently to a farmer who offered to match the price of what one of the convenience stores was selling their fruit from Chile for, but even then this particular supermarket didn’t want to take their locally grown goods. They often don’t see the merits of Irish fruit and want to sell it as cheaply as possible so what you get is fruit from all over the world while Irish strawberries are being sold at the side of the road. Con gets round that by direct selling to most of his customers but does sell some to the supermarkets. He also said to me that if you’re producing a huge amount of one fruit, raspberries for example and the supermarket change the terms of the contract or refuse to take them off your hands you’re really in a vulnerable position so having small amounts of different produce is a safer bet, if you’re solely reliant on a supermarket to take your whole production then you can end up finding things very hard.


He also makes his own juices on the farm starting with apple juice about 15 years ago. A while back he began freezing his excess strawberries and raspberries to make mixed apples and berry juices. And this is fairly technologised stuff done on a large scale, for example he has a juice pressing machine that’s the size of a small car that’s one of the only ones in Europe, so it’s quite specialised stuff. And while you might think that’s enough to be going on with he also has a another alternative enterprise on the farm - a camping and caravan park.

It's amazing to see so many enterprises on the one farm, all of which are pulling in money and working well. There’s no doubt that hard work is one of the key things that goes into his operation, when I was down with him his phone is constantly going, he’s checking in with workers picking the apples and strawberries and really it’s the definition of multitasking. Despite this there is an approach which is working for him in doing small things that don’t require massive investment at the outset.

He warns about farmers growing 500,000 tonnes of something being a lot more vulnerable than someone smaller so it works for him to spread the risk among different enterprises, particularly in dealing with the supermarkets this seems to be an advantage. So while farmers are often told you have to be huge to compete, trying alternative businesses out in small stages seems to also work.

The Countrywide programme featuring this item on Irish apples can be heard at -
http://www.rte.ie/radio1/countrywide/

Cons website is www.theapplefarm.com and he's located outside Cahir on the road to Clonmel, its a super place and a real example of alternative enterprises not only paying their way but being hugely successful.
Posted by suzanne at 6:08 AM