Poor Gormley, he should have listened to Albert Reynolds - "it's the small stuff that can bring Governments down" 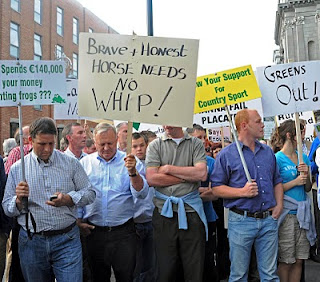 Emotion is the order of the day with any discussion on hunting. A few years ago I produced a television programme about a hunting row in East Galway. I ended up banned from entering East Galway by the Hunt (interesting to see how they were going to enforce this) while one of the anti's I interviewed chained himself to the security gate outside RTE in protest. What I thought was a very balance programme had managed to drive both sides to distraction.

What poor Gormley didn' t know when entering this fray is that you're always on the wrong side of a hunting issue. In an interview on the news at one today he just said "jobs and the economy" three times - he's desperate to get the focus away from his little bill and back onto something not involving furry animals. As Gormley mutters along to sporadic boos in the Dail, his bill to ban the Ward Union Hunt is gathering a flood of name calling and anger around the country. The RISE campaign (Rural Ireland Says Enough) is well organised, well funded and has the support of all the field sports bodies in Ireland ranging from fishing to beagling plus the force of the European field sports organisations. They have an office in central Dublin staffed by volunteers, press release daily and have many influential connections. It's not surprising there is a RISE protest happening at the moment about once a week around the country, particularly if there's a sniff of a Green party conference or event in the area. But RISE's threats are mainly aimed at Fianna Fail - "if you let this Gormley gombeen close down hunting you will pay for it at the next election", being the general gist.


Emotion is ruling the day again. The same happened in the UK when what on the surface should be a small issue brought about huge rural/urban divide and bought Labour the general distrust of the countryside. And its happening all over again here; hyperbole, distrust and on the Greens part, a real lack of how hunting works and it's economic and social impact on those living in the countryside.


Gormley is now saying daily that his bill is to shut down the Ward Union Hunt only, other hunts won't be touched. RISE are saying - Liars. You're just starting the ball rolling to introduce successive bans on fox hunting, harrier packs, beagling and fishing, the Ward Union is just the start.

The bill in essence will indeed ban the Wards from carrying out a "carted deer" hunt. The animals are not wild but owned by the Wards and transported to the location of the meet by trailer on the morning of the hunt. It's the only hunt still doing this in Ireland, stag hunting was banned quite a while ago in the UK. It does not emcompass any other packs or field sports.

Fox hunting itself is a long way off being banned. Fianna Fail or any party with eyes in it's head will have been sufficiently rattled at the well organised opposition to the current bill to not chance bringing something on fox hunting into the frame for a long time.


The other matter of Gormley's puppy farming legislation (Dog Breeding Bill up for discussion this Thursday) has also driven the hunts demented. The fact is that Irish hunt clubs are likely to get an exemption to keep more than 6 breeding bitches and continue producing hounds at the rate they do. So happy days for them. But they don't want their premises to be inspected by vets to see that the animals are kept to a satisfactory welfare level. If you're happy about the health of your hounds, why wouldn't you want a vet to look at them? You can't have your cake and eat it folks.

The dog breeding bill is generally well thought of among those from the veterinary and animal welfare side. I've seen the results of puppy farming, and it's not happening out there in neverland. There have been pet shops in Dublin found to be selling sickly, badly bred "glamour dogs" which had been puppy farmed. And please be very careful buying a dog from the web, they're very likely to have come from a puppy farm. They way to know this is ask the owner can you see the bitch and the sire. You'll most likely be told a big fat no.

Poor Gormley. Albert Reynolds did say it's the small issues that bring Governments down. Debating hunting will always bring you a heap of pain. He should stick to water charges.
Posted by suzanne at 3:37 AM