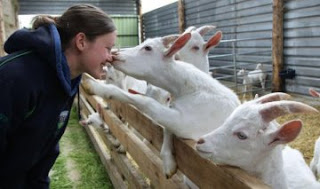 Farming is changing – but so, too, are the people who are at the forefront of the industry. SUZANNE CAMPBELL meets some dynamic young people who have chosen to work on the land in challenging times

A LONG WINTER AND low prices for produce have left many farmers feeling that they are in a sector under siege. But third-level colleges still have large numbers of students choosing to study and pursue careers in agriculture. This new generation of young people is bringing innovation, academic excellence and fresh blood back to family farms around the country. Here, four of them discuss keeping a positive attitude; what it’s like to work with your parents, and their love of a lifestyle that keeps drawing them back to the countryside.

Lorraine Davis , from Tipperary, is 22 years old and in her fourth year studying agricultural science in UCD, specialising in animal and crop production. She has won a scholarship every year for her end-of-year results. “Since I was young I knew I wanted to do something in farming and an agriculture degree was the obvious choice. In UCD I spend a good bit of time studying, but really it’s the practical side that interests me.” Davis’s favourite class was when they examined the stomach system of a cow. “We looked inside an animal at its rumen and digestive system. That’s when I really began to understand bovine nutrition and how the theory relates to reality.”
Davis’s family has a dry-stock farm. They buy in calves and sell them at their finished weight, about 18 months later, to factories. “I like working with cattle, for me it’s the closest thing to what farming is about. The only thing physically difficult can be handling the older animals; you have to be cuter with them to get them to do what you want.”


Davis finds that many people still expect farmers to be male. “Sometimes when I’m on the farm in my outdoor clothes people come up to me thinking I’m a man and are surprised to see a girl. But it’s no problem, they soon see that I know what I’m doing.” Away from UCD and their home farm, Davis works part-time on a goats’ milk farm in Portumna. “It’s interesting as goats are very different to cattle and sheep; they’re highly intelligent. Goats’ milk is very good for asthma sufferers. It’s something I might get into in the future as alternative enterprises like that are what many farms are moving towards nowadays.” At the same time, for Davis it’s not all about business. “Farming can’t always be about money; I like animals, nature and being out in the open air. That’s the big attraction.”


‘Farming is a great life for families’
Caroline O’Neill (26), farms the family’s dairy farm in Ballinadee, Co Cork. This year she won Feirm Factor , TG4’s televised competition for farmers. She has a four-year-old daughter, Katelyn. “Farming is a great life for families. I love that Katelyn can be with me while I’m at work. She helps feed the calves and loves the outdoors; it’s how I grew up.”
Most of O’Neill’s family are involved in farming. “It’s in our blood. We’re the type of people that don’t do well working under somebody else. I couldn’t see myself in an office job, I’d be claustrophobic.” Feirm Factor gave her a chance to show off her different abilities. The programme tested farming knowledge and also practical skills, such as driving a tractor around an obstacle course. “I think I won because I’m a good all-rounder.”


O’Neill says having a passion for what you do is essential. “Farming has to be part of your life in more ways than just being the day job. Many of my friends farm, so when we go out on a Saturday night we talk about farming and swap stories, so you’re constantly learning as well.”
Despite low milk prices in recent years, O’Neill is optimistic about the future. “I believe that if you farm well, you can still make money. I’m very good with cows. I make sure to know every detail. I look at the stats for each animal for how much milk they are producing and what quality it is. “If you like being around animals and understand them it makes a big difference. At the end of the day I want my little girl to have the life I had when I was growing up, so there’s no other job for me.”


‘The world needs food’
Alastair Doherty (28), from Letterkenny in Donegal, farms a 51-hectare livestock farm with his father, who is also a farm contractor. “Farming is a job I love, I wouldn’t do anything else. Beef prices are low but I am still managing to make an income from the farm; it’s just not like years ago when you had a farmer with a wife full-time at home and the farm put the kids through college. Now a farm is one income – myself and my dad are lucky that our farm supports the two of us.” Alastair studied a two-year part-time course with Teagasc and won the student of the year award. “I think I won because I had a positive attitude and sort of led the group. I was working on the farm while doing the course and I began to farm more by calendar, and to allow leeway for the weather.”


He also learned from the bad weather conditions of the past year that planning for the best-case scenario can be costly. “If you expect good weather or good prices for your commodities you’re heading for a fall, so plan for the worst and then you can’t get caught out.” Making plans and seeing them through has helped keep his farm on track. “I’ve learned to make goals for myself; if you get six out of 10 goals achieved you’re going well. It’s important to try new things, but you have to have patience working with a parent. A lot of young fellas get fed up with that and leave farming, and when you’re in your early 20s, the world is your oyster. “I did my travelling and it was so important – you’re never left wondering should I have done this or that. But then I came back home to work on the farm with my father and it’s going well. I chair a discussion group of young farmers and we are positive about the future – the world needs food after all and we are well placed to provide it.”


‘Getting customers abroad is key to survival’
William Keane (28), is a beef and dairy farmer from Waterford. Last September, he won FBD’s young farmer of the year award. Keane studied food science and technology in UCC before working for Dawn Meats and then Bord Bia in London. “Bord Bia was a fantastic experience. I learned a lot about what consumers want in our export markets. I was dealing with small Irish food producers, connecting them with suppliers in the UK. I did everything, including driving to Heathrow to collect a few kilos of artisan-produced butter for an English buyer to taste.”
Keane found a high regard for Irish food abroad, but feels that Irish businesses often fall down on bringing their produce to the customer. “There are people making great food products in Ireland, with good research, marketing, and production, but there’s often a weakness in their route to market. We’re an island nation so getting customers abroad for our exports is key to survival.” Keane’s experience in the export trade gave him expertise that pays off on his own farm. “It gave me more business acumen, and made me more watchful of costs and accounting. It also gave me a unique insight and pride in what I’m doing in terms of producing quality food.” Keane works with his father and finds that good communication is key to how they run the farm.
“I’m lucky in that my father is open to new ideas.”


He believes that farming is going to change in the coming years. “There will be less reliance on supports, but farming can still be central to what we do in Ireland. The markets are there for high quality food. We just need to make use of our natural resources and build on that advantage.”
Posted by suzanne at 4:53 AM