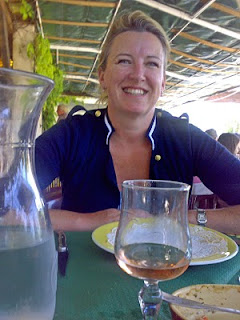 There was a lot about the Wedding at Cana which indicated good planning until a pesky guest from Nazareth arrived on the scene. What the bridezilla's family knew well was, as with all successful evenings, the best wine should be served first. Similar to most weddings, those in charge of the wine at Cana knew that after a few hours solid drinking you can easily give your guests engine coolant and it will go down a treat.
And this isn't a joke; engine coolant has been known to replace alcohol among those fond of a tipple in the colder regions of Russia. It's attractions are such that bears in Canada regularly tear apart snow mobiles in night time suburbs in order to get at the engine coolant, suck it down and slope off down the road with their big arses wobbling from side to side.

Here in Provence as with any trip in a wine growing region it's part of one's duty to drink all manner of wines, engine coolant or not. The local wine - Cotes de Provence isn't the most thrilling of what France produces but as with any appellation there are highs, lows and most of it lies somewhere in the middle. The reds tend to be the poorest of their wines and it's the rosés which are the largest share of the output, in fact half of the rosé wines in France are produced in Provence. Here in the house most of what we are drinking are the rosés, and even the average to cheaply priced bottles are really nice wines, especially in summer.

Yesterday we drove to a local winery near La Motte and, sampled some of their labour. The soil around here is limestone based, really red in colour and the grapes they are using are Cinsault, Grenache, Mourvèdre, Syrah and Tibouren. When we walked around the vineyard we could see the grapes are at this stage in the season, tiny dots the size of a pin head. The vines are generations old, pruned back year after year for what looks like very few green stems of new growth that appear each season. After a ramble around looking at vines, and the chicken enclosure on the farm which had all kinds of geese, dosing sows and about seven roosters happily sharing their intimate space, we went back to the estate offices to sample some wines. I ditched the reds and went for the whites and rosés - (drinking in the middle of the afternoon is a bad idea as it is); they were crisply flavoured with fruity notes and of course, as with buying any French wine from a vineyard, ridiculously good value. A case of their middle of the range rosé worked out at 3 euro a bottle.

Cote de Provence doesn't tend to be widely available in Ireland which is a pity, because at the cheaper end of the scale the wines have a nice rustic feel, and wouldn't break the bank, despite the ridiculous prices we have to pay at home because of excise duty. It's a shame that what dominates the market in Ireland are cheaply produced Australian and Chilean chardonnays which are in many instances, artifically "oak aged" with chemicals and cloy in the back of your throat with a noxious hit. Regretably French and European wines of much higher quality just can't survive in Ireland because they are produced at a marginally higher cost then New World wines but are wildly nicer in taste, more environmentally friendly and not shipped half way round the world. It's when you come to France that again you realise, most of what's on the shelves of your local Spar is in fact engine coolant.