The pizza that's saltier than seawater 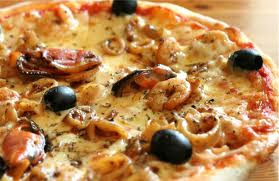 Did you eat pizza lately? If you did, you're one of the 40% of us who eat one of Ireland's most popular foods every week. And if you live in London, you could be eating a pizza that's saltier than seawater. Yes sireee. Health authorities in the UK released an analysis of a pizza from the Adam and Eve restaurant in Mill Hill London which contained 10.57 grams of salt. At 2.73 grams of salt per 100, it means the pizza is saltier than Atlantic seawater.
Other pizzas analysed also showed high levels of salt and fat, some of which would give Elvis Presley's deep-fried peanut butter sandwich a run for it's money.

The trouble is, I really like pizza. Restaurant pizza, take-away pizza, home made pizza. There are many pizzas which are very healthy and clearly others which are not. Mostly these days I make my own, and hopefully by doing so I can control most of what goes into it. With fresh meats from my butcher and local cheeses it also tastes pretty good.

The problem with most mass-produced pizza is that it's full of salt. Salt is a major issue in terms of what we eat in Ireland as one third of us will die of heart-related illnesses. Eating foods with high levels of salt ramps up blood pressure, as your body has to hold on to much more water to get rid of it. And even if we don't add salt to our cooking or at the table, plenty of foods have hidden salt which we're totally unaware of.

Earlier this week I wrote a piece in the Irish Independent about the big offenders in the hidden salt category - even soups which we may think of as healthy often have large amounts of salt. Check it out for tips on what to avoid, and some tactics to beat the food manufacturers at their own game.

http://www.independent.ie/lifestyle/independent-woman/health-fitness/too-much-salt-can-leave-more-than-just-a-bad-taste-3072076.html
Posted by suzanne at 12:39 PM