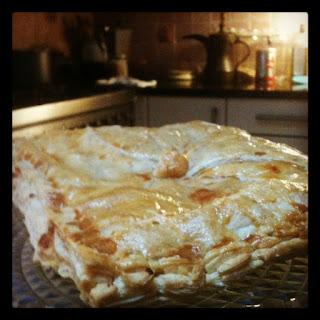 I was glad to read in Psychology Today that a quarter of people fail in their new year resolutions in the first week. Phew, at least I'm not on
my own.
In fact, that's a complete lie. I didn't make any.
You could say this arises from fear of failure but it's probably more a healthy case of can't be bothered. Don't get me wrong - new year resolutions are great, and setting ludicrous goals even better, but for the day that's in it, January 1st doesn't signify anything too dramatic for me; only getting rid of the Christmas detritus, using up half a tonne of frozen turkey and baking a Galette des Rois.
I cheated at my Galette this year. Traditionally it's a cake for the feast of the Epiphany which is Friday the 6th January. But this year I made two Galettes on New Year's Eve for a house party up the valley from us. It was a wild stormy night as we drove up the winding lanes in our 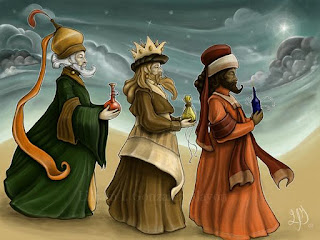 battered Land Rover to the head of the valley. And just like the wise men, there were three of us, transporting gifts of Galettes, wine, Bollinger and a fellow guest with a bandaged head and a broken thumb.
It was that kind of night. Not one of the healthiest starts for the New Year but a brilliant one.
In Catholic France the Galette des Rois celebrated the arrival of the three wise men. It's also the day named "Little Christmas" or in Ireland "Nollaig na nBan" which translates as Women's Christmas. This was possibly because
under the Julian calendar, Christmas Day fell on that day whereas under the Gregorian Calendar, (the present day system) it's the 25th.
Anyway, as we're not great Christmas cake, pudding or mince-pie eaters in our house, the Galette is a Christmas staple, and devoured long before the Epiphany. It's a simple recipe, and if you are pressed for time as I usually am, you can use pre-made puff pastry and the result will still be pretty delicious. After you roll out the pastry it literally takes about five minutes to prepare. It's simple, mouthwatering and for me, the most perfect of French pastry treats. 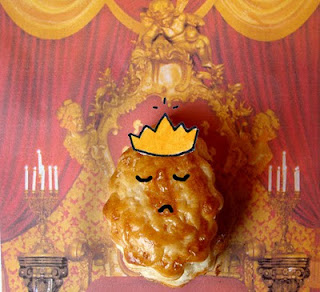 I wish you all a happy and healthy 2012; may cooking and food provide you with respite, comfort and fun in these strange and often unsettling times that we are living in. Basketcase will still be here; keeping you company in your travails; supplying scandal, food news, the wild, obscure and occasionally profane.
But in the meantime have a slice of Galette, and let me know how you get on. Happy Eating.
Galette des Rois
100 grams ground almonds
100 grams caster sugar
100 grams butter
one egg, lightly beaten
400 grams home made or ready made puff pastry
three drops almond essence
Mix the butter and caster sugar into a paste then add the ground almonds and the almond essence. Bind together with the beaten egg.
Roll out the pastry into two 10 inch rounds. Spread the almond paste on the first round, spreading it out to within an inch of the edge. Place the second round of pastry on top of the first, press the edges together, and score the top in semi-circular lines. Brush with a beaten egg and bake at 180 for 25 minutes.
You better be hungry x
Posted by suzanne at 12:24 PM