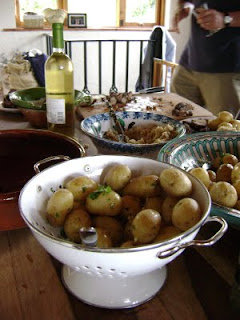 Thanks to all the readers of this blog; those who've been with it since the start and those who've newly discovered it; seeing the traffic to Basketcase from all over the world and the comments is a huge boost to anyone who blogs and I can't thank you enough for your interest.

I'm about to take a short break from my journalism and blogging as I've a baby due this week. But there'll still be plenty of food news, food safety scandals and other matters for me to write on as the summer unfolds. After all, I started the blog while looking after my first newborn so hopefully the reality of looking after two small vigorous creatures won't completely melt my brain. (I think I'll be looking back at this sentence and weeping in about two weeks time).

Over the past week Philip and myself have been overwhelmed with the reaction to "What's Ireland Eating" which aired on television here last Sunday. The documentary came out of our book Basketcase; What's Happening to Ireland's Food? which we published two years ago. Philip cannot walk through our local village, shopping malls, petrol stations, car parks etc at the moment without being stopped by viewers who all have something to say about what was in the documentary and compliments to share with us. Farmers I've been talking to this week for an upcoming story for the Irish Times are full of praise and heartfelt surprise that at last someone is taking an interest in their livelihoods. 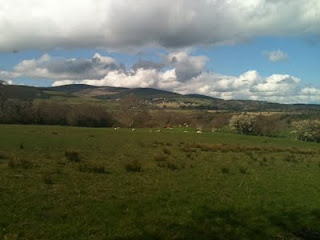 If you want to watch the show it's available online here - http://www.rte.ie/player/#v=1097870
If you can't watch it on the player check out a synopsis of the programme at Aoife Carrigy's excellent blog http://holymackerel.ie/ (the cheque's in the post Aoife).
The feedback has also reflected the power of social media. On twitter the day of the broadcast we used the hashtag #whatsirelandeating and it was the top trending topic in Ireland that day. People tweeted details of their diet that Sunday - everything from Skittle sandwiches to Irish St.Tola's cheese on toast - we retweeted many of them and momentum built fast, as the programme was being broadcast, nearly a million Irish people tuned into it and 574,000 watched the entire show which is a huge figure for a documentary in Ireland.

Again we were overwhelmed by the online comments and reaction and it has developed an online stream of debate on food since. We never imagined the amount of positive feedback we would get or the huge numbers of people really engaged with the issue of food, where it comes from, what's in it, and keeping food production in Ireland as part of our future.

As I'll be checking out of social life for a small bit, later this month I'll miss the second For Food's Sake event in Dublin, which is a cracking night for any of you food folk out there looking for what is at present, rare combination of food, chat and a lot of new ideas to come away with. Here's details of the event and it's a short goodbye from me. Take care all of you, talk to you soon and happy eating. I'll be tweeting a little; detailing the stand out dishes of the maternity hospital that deserve mention, (I'm desperately trying to rein in my enthusiasm) and any big food news that comes to attention. www.twitter.com/campbellsuz x

The Irish food industry is something we should all be proud of and deserves a platform for discussion. For Food’s Sake is a new bi-monthly evening of food discussion and tastings. Each themed night of discussion will be chaired by journalist and food blogger Aoife Carrigy (of HolyMackerel.ie, and former deputy editor of FOOD&WINE Magazine), joined by a panel of four guest speakers from across the broad spectrum of the industry. There will be tastings from several Irish artisan producers who will tell you a bit about why they do what they do. There will be a chance to win some great foodie prizes, and an inspirational talk from an Irish chef just back from a coveted stage at Noma in Copenhagen, recognised as the top restaurant in the world.

Manager of The Sugar Club and food writer Oisin Davis will host a Karaoke Cook-Off between DJs Conor G and David De Valera, who will pit their toastie sandwich-making skills against one another. And of course there will be a full bar to help get the conversation going. After the success of March’s inaugural night’s discussion (which focussed on the opportunities and challenges facing Irish food producers) we now turn our attention to the restaurant industry.


We will ask the following panelists: ‘Are Irish restaurants up the swanny?’ Joe Macken, restaurateur (JoBurger & Crackbird)Enda McEvoy, chef (Gregan’s Castle & Cook Wild Project)Paul Cadden, restaurateur (Saba restaurant & former President of RAI)Caroline Byrne, food writer (Bridgestone Guide Dublin editor) We’ll also be asking, if Irish restaurants are up the swanny, how did they get there? Did they paddle themselves up there on the back of the Celtic Tiger during the so-called ‘Rip off Ireland’ days? Why do we pay so much more for a meal in Ireland than the equivalent in Spain, and where is our money going?

Keep an eye on their Facebook page and their blog at forfoodssakeireland.blogspot.com to keep updated. Press release with more details below.
Posted by suzanne at 6:51 AM