Finally, our food documentary "What's Ireland Eating" is about to go on the telly box 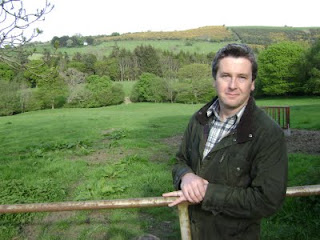 I left television in 2005 to write full time, but strange forces have kept pulling me back in, in particular the making of this documentary which airs on Sunday night on RTE one. Titled 'What's Ireland Eating?' it was developed from the book Philip and I wrote on food two years ago - the book gave birth to this blog and also to the documentary, so in a way it's going full circle to see it finally on the television.


Initially the book (Basketcase - What's happened to Ireland's Food) was so broad in focus that no one hour doc would encompass all the strands in it. So RTE and Stopwatch Television the producers, veered towards a consumer-focused piece of television which is probably more appropriate for the audience. It also relates to all of us in terms of how we behave around food - what decisions we make in the supermarket, how what we eat affects our health and our childrens health, and how in turn how these decisions affect rural Ireland and farming. How we shop will also have a huge bearing on the type of food model we have here in the future. Right now it's a remarkably good one, that sometimes, sadly we don't appreciate enough. 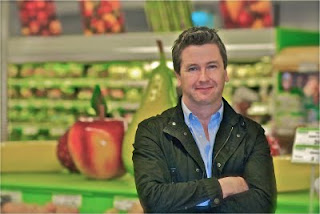 Here's a picture of Philip Boucher-Hayes my husband (standing beside some very strange fruit in a supermarket) who presents the documentary. He spent long days on the road travelling up and down the country meeting farmers, consumers and those passionate about what the effect of what we eat has on the wider economy and environment. Working with your spouse sounds like a nightmare but funnily enough we managed to get through both this project and the book without a major disaster. Our only real falling out on the book was when Philip had still not finished off his sections of the book and instead diverted himself with putting up insane amounts of Christmas decorations, despite a deadline looming. Our house looked like a Bavarian forest with branches of fir trees and tendrils of ivy draped from every possible hanging place. At one point I was going to write in the dedication of the book "You might not think much of this book but you should see our Christmas decorations, they're fantastic".


We finally finished the copy and sent in the disk just as I began labour pains on our first baby. This time it's kind of the same thing - the documentary was finished last Thursday - and I'm due baby number two in a weeks time. Fantastic timing again. My role on the production was Food and Farming Consultant - a grand title which in my fantasy world suggested a consultants wages but strangely it doesn't work like that. I'm also in the documentary for a little segment which we shot in the garden and looks a bit like a Timotei ad, this is no compliment to me, simply the wonderful summer light blasting either side of my head.

A big thanks are owed to the wonderful production team of Tom Johnston, Mary Murphy and Aisling Milton who put all the hard work in and to Colm Whelan who shot it and did a really lovely job. As a former director/producer who spent many years filming the countryside when I produced Ear to the Ground, I really can't emphasise how gorgeous he has made this production look, Colm you've surpassed yourself.

One of the really original things about the documentary is the specially commissioned research into the groceries bought by 3000 households, they re-scanned their goods once they got home and from that information we formed a picture of our shopping habits. Some of the stats were really surprising - we are the biggest consumers of breakfast cereals in the world and 43% of our diet in Ireland is processed foods. In the documentary Philip also visits a school and has a look through childrens' lunchboxes, the contents of some of which are hard to believe.

I hope anyone who tunes in will find something that connects to them in it and at the very least be entertained for an hour or so. For twitter users the hashtag is #whatsirelandeating and it's on RTE one television 9.30pm this Sunday May 8th. Enjoy and happy eating x

Below is a link to the RTE page on the documentary -
http://www.rte.ie/tv/programmes/heart_land_whats_eating_ireland.html
Posted by suzanne at 1:17 PM