Food that's a little too wild to eat 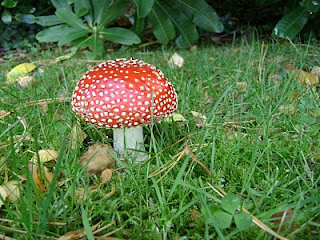 It's nice to have food in the garden this time of year but perhaps not the Fly Agaric mushroom. Styled by Walt Disney; it's poisonous, psychoactive and great news if you own a head shop, but not if you've a toddler who wanders round the garden in the tutelage of a mentally challenged Labrador. So I need to get rid of it, fast.

Popular as a hallucinogenic it's not famous by accident. Fly Agaric was used popularly to kill flies but its real claim to fame is that vikings were fond of it to jizz themselves up for battle. They reckoned it was too strong to be eaten raw so fed the mushroom to reindeer and then drank the deer's urine to limit the effects.
And in our garden, unfortunately it's not alone, there's a whole nightclub of mushrooms partying on the lawn at the moment, including lots of "magic mushrooms" of different types, we counted over twenty varieties before giving up. From peering into my wildlife book, it looks that we have Orange Peel, Butter Cap, Tawny Grisette, Shaggy ink cap, Sulphur tuft, Bay Bollette, Sickener (no surprise - poisonous), Rose Russula and Chanterelles which are very nice to eat indeed. 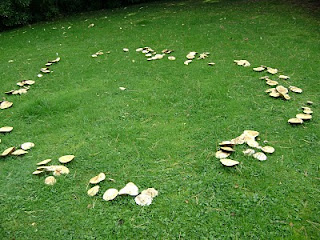 While I've gathered and cooked the common white mushroom before, I dithered over whether to cook any of the stuff in the garden - it's simply too hard to identify which is poisonous or not, and some of them looked like death caps. There were a ring of what looked like fairy ring champingnon but again I bottled it when it came to eating them. I know that at this time of year there are mushroom gathering days around the country to help identify what gems you might have in your garden, but without this expert advice I decided not to chance it.

My father who knows a bit about mushrooms looked at me in shock when I told him I was going to cook the fairy ring mushrooms. He's suspicious of anything that grows in a circle, maybe he's right, lots of nasty things grow in circles - like ringworm. His warning worked and I didn't eat them. In fact we gathered the whole lot off the lawn and filled two barrow loads before we gave up for the day. There are literally hundreds still growing, and they will probably continue to appear over the next few months. If it weren't for the baby I would be happy to leave them be.
This is one of the dilemmas with wild food - I'd much rather gather food on my doorstep then have to pay for it elsewhere, but foraging takes knowledge and experience, otherwise you could find yourself in A&E getting your stomach pumped. And in respect of many mushrooms; some foods are just too wild to tolerate inside, or outside your kitchen.