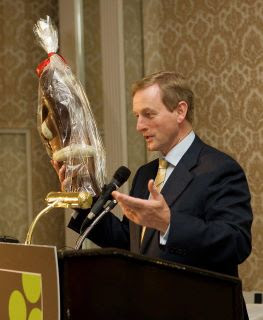 There's very few people able to coerce the premier of any country into auctioning a chocolate rabbit but if anyone's up for the job, it's Margaret Jefferes. Margaret is founder of Good Food Ireland - a tourism and food organisation which brings together the best of Ireland's food producers, restaurants, cafes and accomodation. In my work I come across members of Good Food Ireland all the time and it's testament to Margaret that she has gathered those at the top of their game into her organisation. The sublime Merrion Hotel, Cliff House Hotel, Chapter One and food producers like Graham Roberts of Connemara Smokehouse, Glenillen Farm and Cashel Blue cheese are all members of the group. These are people and companies who I've covered in stories because they are doing something different and authentic in food. And when I travel around the country to interview farmers and food producers I always find the Good Food Ireland folk a fantastic, energetic and fun bunch of people. The minute I get out of my car they're there with a warm welcome, an honesty and humour that always makes me really warm to them. Maybe it's because they gain strength from each other in what can be a lonely business - running a food SME in a recession. But whatever the reason, they have huge passion fo 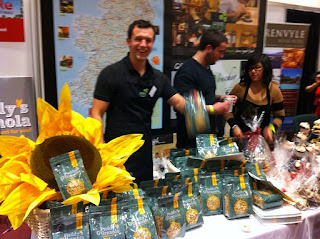 r what they do, and I always end up chatting for hours and more importantly, laughing, a lot.

Earlier this week they held their annual conference and awards in the Shelbourne Hotel Dublin. It was an honour to asked to speak at the conference alongside the likes of Kevin O'Sullivan editor of the Irish Times, Feargal Quinn retail legend, Fred Karlsson Founder of DoneDeal.ie, and Mary Carney winner of MasterChef Ireland. Mary spoke about "Creating Great Taste Memories" and the good and bad memories we all have of Irish food which brought me back to the terrible days of the 1980s microwave lasangne but also my Donegal grandmothers insanely good soda bread. The lunchtime spread of foods from Good Food Ireland was so fantastic it was hard to take in. I think I had about fourteen separate things on my plate at one stage, everything packed with flavour, beautifully cooked and as Irish as it comes. Some of the highlights from the conference talks on the day were from Sile Gorman, Aran McMahon and Peter Ward from Country Choice who all 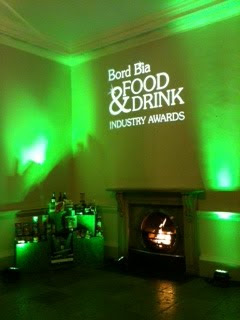 spoke about how difficult it is to make money out of producing or serving good food, but that what keeps them going is the love affair they have with food, and the feedback they get from their customers who come back again and again.
The awards ceremony was later in the evening and it was lovely to see some great Irish businesses like Goatsbridge Trout farm, The Chocolate Garden and Ballyvolane House collect some well deserved silverware. But for me it was a race over to Trinity College for my second appointment of the day - the Bord Bia Food Industry Awards, and yes, I finished the evening pretty well fed. The Bord Bia awards were slightly different as they are aimed at larger food businesses. Huge Irish success stories like Largo crisps won awards alongside Flavahans porridge (a staple in our home), Country Crest, Green Saffron, Jameson Whiskey and a new collaboration between Kerrygold and Cashel Blue which will see the Grubb family's handmade cheese on shelves in the mega marketplace that is the USA. It's fantastic to see this kind of innovation taking place as our big brand leaders like Kerrygold could do a lot to give smaller businesses a leg up in markets where they already have a foothold. And now more then ever, when 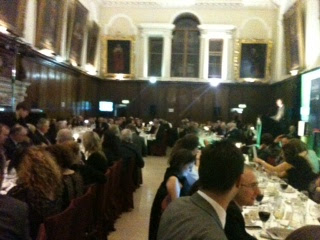 our food exports are so important in keeping jobs in Ireland is the time to exploit this further. Here's a shaky photo of Minister for Agriculture Simon Coveney speaking at the event; bigging up the export performance of Irish food which is set to hit 9 billion euros by the close of the year. Just so you know, the Bord Bia dinner was St. Tola's Cheese, roast Irish pork and a berry crumble to finish. As usual with Bord Bia's events, it was beautifully done and a really lovely evening. For me it was also a chance to catch up on the gossip with other farming and food journalists and we had a lively night with lots of laughs. Particularly pleasing to me was seeing the "journalist writing tomorrows piece on back of napkin" approach is live and well, as a quick scan around the media table revealed. Having no napkin to hand, my own scribbled notes were made on the back of my speech from earlier in the day. We're nothing but enterprising, us lot.
Posted by suzanne at 11:56 AM