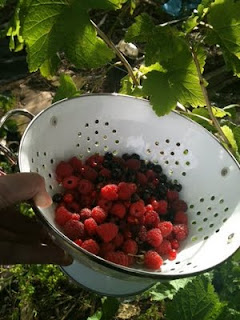 It's summer time and there are berries to be picked. Our crop of raspberries is fantastic, as are the blackcurrants but the majority of our vegetables grew miserably. I lie, they didn't grow at all. Complete disaster teaches you good lessons - most of the seeds failed to germinate because the temperature where we live (on the bed of a valley) was too cold for them. Then some late frosts killed any survivors. So a month after starting three different varieties of tomato, basil, coriander, broccoli, lettuces, and other crops not a single one had germinated. Not a smidgen.


So it was back to basics, and learning about the newer, colder conditions of where we now live. So I planted round two of my seeds, abandoned most of the tomatoes and we now have a small crop of vegetables. When you grow even a 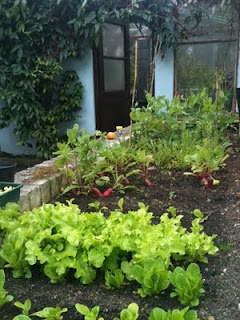 tiny amount of your own food you realise how insecure the whole business is, and how placing all of the responsibility of providing us with food in the hands of big business may not the best idea in the world.

At the moment I'm looking at America a lot and the crazy stuff going on in their food sector. After revelations this week that Tyson, one of the biggest food brands in the US was caught bribing vets in their Mexican meat plants to pass unfit meat as edible, we also had the new footage of animal welfare abuse at a pig plant. On top of that food safety and farming budgets are being cut in the US and as one writer said recently in the New York Times, public health and food safety are now seen as "liberal issues". What? Liberal? So now you're left wing if you want to eat a burger and expect to be alive an hour later? America's food environment can be truly hairy stuff and it's something I'm currently researching for a piece. At the moment the piece is looking very long, believe me. 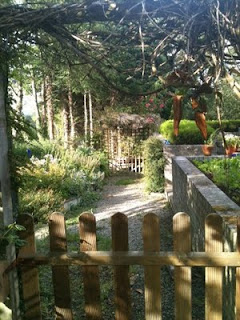 I'm also working on a new project on Irish food which is very exciting, I can divulge more on that at a later date. At the moment it's in its infancy so alongside looking after the new baby I'm digging away on that. One thing that's lovely at the moment is that the weather has turned a bit more summery and I am spending more time in the garden. As you can see from the photo above some of our second crop of lettuce are coming on well and the radishes have also grown strongly. The peas are looking good and the hardier herbs such as thyme, rosemary and parsley survived the move from our former house. Somebody bribed them, obviously.

It's also lovely to see the summertime finally kick in (lets face it it'll be gone in a week or so) and our neighbouring farmers getting a chance to cut silage for Winter fodder. Again, I've learned from them that "our side" of the valley is colder than the other side - they get two cuts of silage over there whereas in the fields surrounding our place one cut is all you'd get. This is because with le 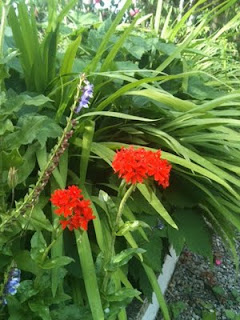 ss light and a slightly cooler temperature the grass grows more slowly. Again, even in the space of a hundred yards, the conditions that produce food change. And this is why we should appreciate the stuff more and think about the work that goes into it. Last night as we finished the baby's last feed at 1am my neighbouring farmer was still towing bales of silage out of the field pictured below. Producing food is a hard job, and as I learn every summer, if I had to grow everything I eat myself I'd be very poorly fed indeed. 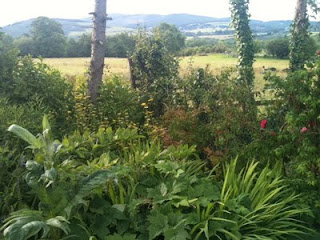